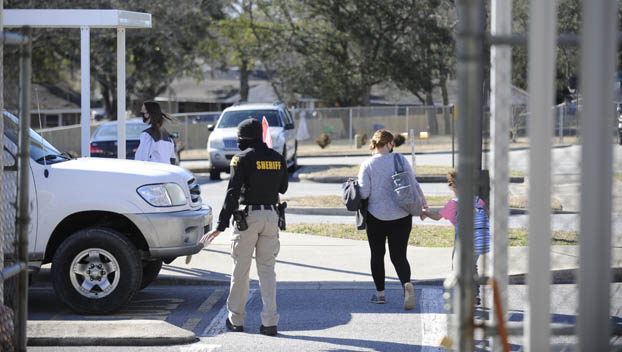 Beaufort County Schools is moving forward with negotiations with a contractor for school resource officer services.

How that contract will be funded — and specifically how much of it will be covered by the county — is a topic the school board and the Beaufort County Commissioners will discuss in a joint meeting next week.

The school board on Tuesday approved Superintendent Matthew Cheeseman’s recommendation to begin negotiations on a three-year contract with Allied Universal Security Services. Once completed, that contract would begin July 1, with the Sheriff’s Office continuing to provide SRO services until then. Allied Universal is one of the companies that responded to the school system’s request for proposals (RFP)

The school system is looking to have one resource officer at 12 of its 14 schools, the two exceptions being the Ed Tech Center, which is housed on Southside High’s campus, and Beaufort County Early College High School. There will also be a chief supervisor. All 13 individuals will be sworn law enforcement officers.

Cheeseman said the estimated annual cost to bring in those 13 individuals is $863,000. That doesn’t include other fees such as the cost of obtaining vehicles for those officers, which is estimated to be approximately $218,000.

The school system currently contracts with the Sheriff’s Office for SRO services. The county provides $337,000 in funding for those services, and the rest of the bill is covered by a $433,000 grant written by the school district and administered by the county.

Sheriff Ernie Coleman in November 2020 said he would cancel within 90 days the memorandum of understanding through which his department provides deputies to serve as SROs, citing what he called “defunding” of the Sheriff’s Office by the county commissioners. Coleman eventually wrote a letter in which he further explained his decision.

Deputies are still serving as SROs, although those deputies can now be temporarily pulled from their posts to perform statutorily-required tasks if needed. Previously, those SRO deputies wouldn’t handle outside tasks until after school hours.

Cheeseman said he, Board of Education Chairwoman Carolyn Walker and Vice Chairman Michael Bilbro had met with some commissioners to discuss SRO funding in late 2020.

“As initially described to Mr. Bilbro, Mrs. Walker and myself by the county manager and two county commissioners back in December or November, they said, ‘Look, gather the information, bring it to us and we’ll look at funding,’” Cheeseman said Tuesday. “However in a phone call from (Board of Commissioners Chairman Frankie Waters) today, he said after speaking with county commissioners, It’s his belief that they’re kind of flatlined on the funding stream of where we are. It doesn’t mean I can’t go back in and negotiate with them and ask for more. But that is what he stated to me verbatim with (Assistant Superintendent Mark Doane) in the room.”

With the current funding stream in place, Cheeseman said the school system would need to contribute approximately $80,000 per year from one of its accounts to cover the projected $863,000 SRO bill. He says the school system can afford that cost.

The county commissioners and school board will hold a special called joint meeting at 6 p.m. on Tuesday, March 23, to discuss funding for the new SRO services contract. The meeting will take place at the BCS Professional Development Center, which is located at 845 N. Pierce St. in Washington.

Waters told the Daily News on Thursday that he personally is against using additional taxpayer dollars to fund a new SRO contract. He noted that formal funding negotiations typically take place during the county’s budget process, which began with a planning retreat in late January and is slated to end in June. The manager’s recommended budget will be presented to the commissioners on May 17, and that will be followed by budget workshops scheduled over a period of two weeks.