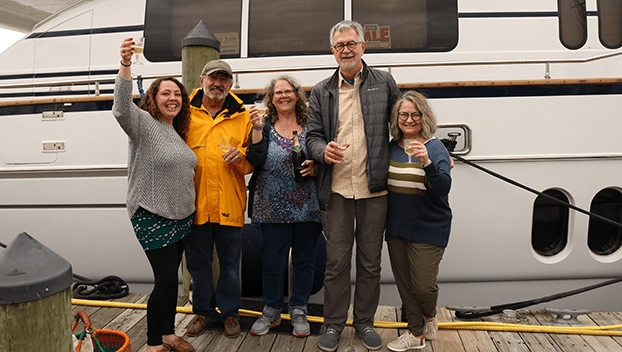 HONORING FAMILY: The Turners and Midgetts are excited to celebrate the official renaming of their two vessels. Both boats are renamed for important women in the family's ancestry asa way to honor their legacy. (Chelsea Hofmann/Washington Daily News)

With permission of Thor, the Norse god of lightning and thunder, consent from Poseidon, Greek god of the seas, and an official blessing from an Episcopal reverend, the newly renamed Miss Comfort and Georgianna are ready to set sail along the Pamlico River.

Midgett’s boat, now Georgianna, is named after his grandfather’s boat of the same name. Midgett’s grandfather frequently came into Washington on his boat, Georgianna Gaskins, which was named to honor his sister, Midgett’s great aunt.

Turner’s boat is named for his grandmother, affectionately known to most as Miss Comfort. Miss Comfort and Midgett’s grandmother were sisters, making him and Turner second cousins.

“Both ladies in this story, Comfort and Georgianna, were born and raised in Hatteras Village and were members of the same generation, and had family connections,” Midgett said. “Because of their relationship and the coincidence of him and I renaming our boats for our Hatteras ancestor, we thought it would be fitting to have a dual ceremony.”

The ceremony for both boats occurred on Thursday, March 18. This day was specifically chosen by Turner, as it would have been Miss Comfort’s 131 birthday. Before the boats were christened, Turner asked Norse god Thor for permission to perform the ceremony on what would traditionally be recognized as his day.

“Naming a vessel or boat can be done in many ways. Just putting the name on the back and sailing away is what a lot of people do. We had a boat and we did that. A bottle of champagne on the bow is a notable thing,” Turner said. “Some people don’t even name their boat at all. We did that one time and it really weighed on me for a while. Some people choose to rename a boat with more pomp and circumstance as a symbolic thing and that’s what we’re here to do today.”

Midgett’s Georgianna was renamed and christened first. Following tradition, the boat had to be de-named before it could take on its new identity. This was done by asking Poseidon, Greek god of the seas, to purge the vessel’s previous identity from the sea’s memory and accept the new name.

A Christian blessing was performed by Rev. Stephen Batten of Trinity Episcopal Church to finish the christening. Karen Midgett, Ray’s wife, was given the honors of smashing the signature champagne on the bow to officially deem the boat Georgianna. Turner’s ceremony followed suit with a de-naming also necessary. Poseidon once again showed favor and after Rev. Stephen Batten blessed the ship, Turner’s daughter, Katie, smashed the champagne along Miss Comfort’s bow.

Both ceremonies were concluded with a champagne toast to good seas and fair winds for the two vessels and everyone aboard. 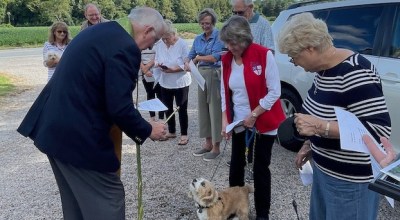 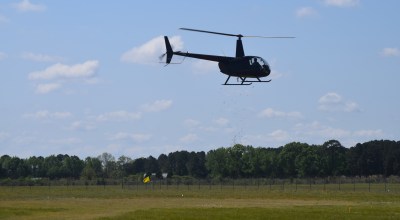