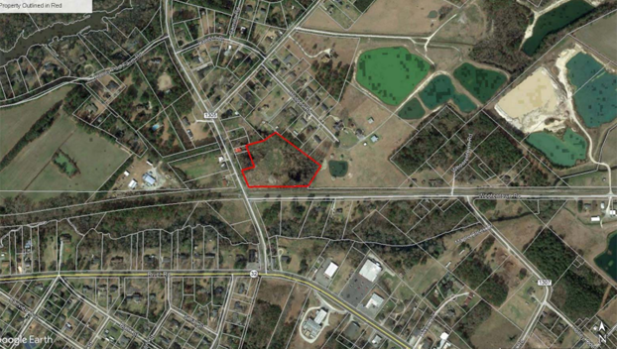 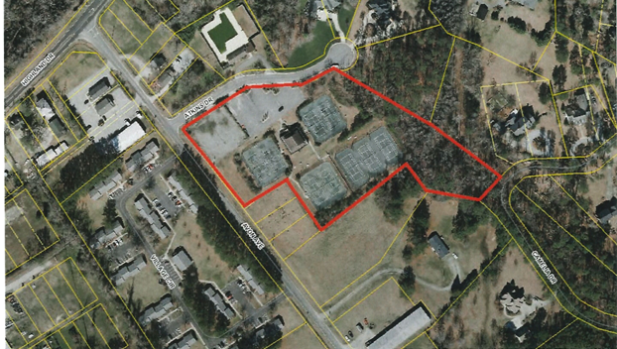 The property that houses the former Washington Racquet Club is owned by Bill and Dale Peele.

Steve Fuchs has filed a lawsuit against the City of Washington, claiming that City Council denied him due process and equal protection of the law while turning down his three attempts to rezone his 4.98-acre property located near the intersection of Brick Kiln and Whootentown roads.

According to a complaint filed by Fuchs’ attorney, Wesley Collins of the law firm Harvell and Collins, Fuchs is seeking a jury trial and $25,000 in damages. In additions to the accusations about due process and equal protection, Fuchs is asking that the court declare that City Council acted “arbitrarily and capriciously” when it denied his rezoning requests, and that the rezoning petition “should be be remanded to the City Council for entry of a decision consistent with the substantial, competent, material, and unrefuted evidence supporting the rezoning.”

The complaint was filed in Beaufort County Superior Court last Tuesday, May 4. City Manager Jonathan Russell said on Monday that, to his knowledge, the city hadn’t yet received anything concerning such litigation.

Fuchs purchased the 4.98–acre property in 2018. The property once housed a lumber mill, but had sat vacant for decades before Fuchs purchased it. Fuchs said he cleaned debris from the site, hoping to make it suitable for use as an investment property.

Mike Weaver, of Pendergraph Management in Raleigh, presented the second rezoning request. He had an option to purchase the property, and he showed interest in potentially building a commercial development there.

City Council rejected both of the first two requests after hearing concerns in public comment sessions about drainage issues on the property, as well as other concerns about a multi-family housing complex potentially being built on the property.

In March 2021, Fuchs made a third rezoning request. This was another attempt to have the property rezoned to office and institutional. This time around, the planning board recommended that City Council deny Fuchs’ request. Council ultimately voted 4-1 in favor of that recommendation.

Aaron D. Arnette of the New Bern law firm Sumrell Sugg represented Fuchs at the March meeting. Neither Arnette nor the firm he works for are involved in the lawsuit filed last week. Arnette noted that city staff had determined that all three requests were in line with the city’s Comprehensive Plan.

Arnette argued that the city “failed to articulate any reasoning or rational basis for denying” the requests, and “failed to provide any justification for treating Mr. Fuchs differently from the adjacent and similarly situated property owners whose properties are zoned R15S (residential)” and those who had their properties rezoned to office and institutional in 2003.”

“I respectfully disagree that, (based on) what I understand about this situation, there’s an equal protection claim,” City Attorney Franz Holscher said at that time. ”But they can assert one and we’ll go argue that at a later date.”

Dorian Miller, who spoke out and submitted petitions against Fuchs’ first two requests, said neighbors of Fuchs’ property didn’t have a problem seeing the property redeveloped in accordance with its current zoning. They just want the local area to remain a single-family neighborhood.

Bill and Dale Peele, the owners of the property that houses the now-defunct Washington Racquet Club, are trying to develop that property into an 18-lot, single-family subdivision.

City Council denied the preliminary subdivision plat for that property with a 2-3 vote last month. The Peeles appeared at Monday’s City Council meeting to further discuss the matter.

“We have consulted with legal counsel, which has advised us that there is no legal basis for the City Council to not approve the plat for Powell Place, as presented on April 12,” Bill Peele told City Council. “We’re here to seek clarification on your decision with a motion to approve — two voting yes, three voting no. We need an approval or a denial in order to continue forward.

Mayor Donald Sadler and his wife, Alice Mills-Sadler reside on Atkins Drive, which is in a neighborhood adjacent to the property the Peeles are seeking to redevelop. Donald Sadler has recused himself from all discussions concerning Powell Place.

“We’re here to give you a second chance to get this right,” Bill Peele said. “We desire a final decision, and request that  you provide that decision to us at this time.”

Holscher advised City Council not to respond to the Peele’s request, given that an attorney now represents the Peeles.  Clark Wright, of the New Bern law firm Davis Hartman Wright, was not present at Monday’s meeting.

“No rationale has been presented as to why the “No” vote existed,” Bill Peele said. “We’re just asking you to give us a motion to approve or deny it.”

Bill Peele then asked, “Franz, what direction do you give us at this point?”

“I think you should consult with your lawyer,” Holscher responded.