Tips for traveling this summer 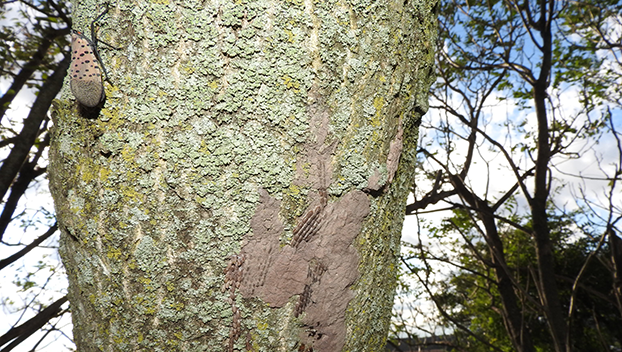 LOOK OUT FOR EGGS: The spotted lanternfly is an invasive species that is plaguing parts of the East Coast. The eggs for this species can be found in and around trees, as well as on rusted metal and some forms of stonework. If traveling this summer, keep an eye out for any signs of the invasive insect. (Richard Gardner / Bugwood.org)

Most of us tend to save our vacation time for summer travel and fun. My family usually spends time at both the beach and visiting family up and down the East Coast. It is fun to me, being a plant geek, to see the difference climate can make on what plants grow where. As you travel the interstates from place to place, take a minute to learn the trees you see along the highways and byways. Last week I took a trip to Pennsylvania to see family. As we moved further North and inland, we began to see the trees change from pecans to walnuts. We also counted 38 state license plates, the District of Columbia, and three from Canada.

You can encounter people from everywhere when you travel, we even saw a license plate from Oregon. If we have people from Oregon on highway 95, I’m certain they have people from North Carolina. This is what makes it so important to know about pests as well, especially when we travel. This is one of the easiest ways for us to spread unwanted pests from place to place.

One of the biggest pest issues right now in the horticultural world is the invasive, exotic, spotted lanternfly. This pest was introduced in Pennsylvania through imported Chinese stone tiles in 2014. The egg masses were on the tiles and went undetected until they had hatched. Unfortunately, this happens all too often.

This insect has been extremely prolific since its introduction. It is a piercing/sucking pest that feeds on the sap of trees. They have mouthparts similar to mosquitoes called a proboscis that they inject into the tree to feed on the sugary sap. As such, they emit a very sugary substance called honeydew. This is similar to pests such as aphids and lacewings. The spotted lanternfly emits so much honeydew that it looks as though it is raining sap under an infested tree. The honeydew is attractive to other unwanted guests such as ants and wasps. A fungus, called sooty mold, is a secondary pest of the honeydew. Aptly named sooty mold because it turns everything black from propane tanks to houses to leaves of other plants. Sooty mold can be washed off using dish soap and a little elbow grease.

The spotted lanternfly feeds upon many species of trees, over 70 have been identified thus far. However, the pest really seems to prefer the Tree-of-Heaven (Ailanthus altissima), so much so that it is thought this could be a possible host species for the spotted lanternfly. The problem here is that the tree-of-heaven, an exotic, invasive species as well, is everywhere. This tree is an invader of right-of-ways and early successional field borders. The leaf and growth pattern closely resemble that of sumac and from a distance could be mistaken for walnut or pecan. Tree-of-heaven is currently developing its seeds and can be distinguished very easily from a distance right now. As we drove the highways this past weekend I was alarmed at the sheer number of tree-of-heaven that dotted the road side, there were thousands. This makes the spread of the spotted lanternfly a very legitimate concern for us in North Carolina.

There are several Pennsylvania Counties currently under quarantine to try and stop the spread of the spotted lanternfly but this is a difficult thing to accomplish. The second concern for the spread of this pest is their preference for laying egg masses on rusty metal. I mentioned earlier the number of different license plates we saw from across the country and even into Canada. This includes cars and semi-trucks alike, all of which have some rusty metal. I also mentioned how prolific tree-of-heaven is in right-of-ways, this includes railroads. Rusty metal on railcars and tree-of-heaven along the railroads makes this a perfect storm for spreading this pest not only South, but across the country.

If you have a question to submit, please email Gene Fox at gene_fox@ncsu.edu. Having trouble with growing in your home landscape, call the Extension office and speak to an Extension Master Gardener Volunteer on Mondays and Wednesdays between 10 a.m. and 12 p.m. at (252)946-0111. Learn more on Facebook at the Blacklands Area Horticulture page or visit the Extension Office located at 155 Airport Road in Washington.