A Quixotic quest-we may never know 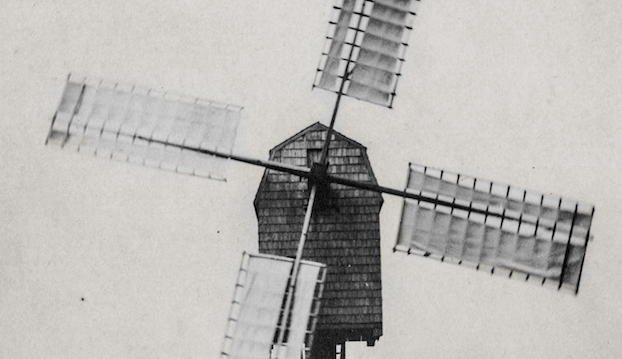 As a kid growing up on Hatteras Island, I heard of old windmills that once populated the Outer Banks. Unfortunately, the only remnants were the old millstones scattered amongst the houses in the villages. Recently, a friend called and said he had a property in the historic district of Washington, and on the backside of the lot was an old millstone. I was immediately intrigued, for I had recently uncovered an old map of the Pamlico River that showed a windmill located on the south shore. It was directly across from the Washington waterfront! Is it possible that the stone was once a part of the old mill?

Before the age of steam, windmills were used to grind grain and corn and sometimes for pumping water. Records indicate that between 1850 and 1900, at least five existed along the rivers and bays of Beaufort County.  Hyde County, including Ocracoke, had as many as 24. These coastal windmills were of the “post mill” variety, which were constructed by mounting the housing that contained the mill works on a massive central post.  This allowed the entire structure, including the sweeps or “sails,” to be turned into the wind for maximum efficiency. The gears and mechanisms used to transfer the power from the turning sweeps to the millstone were made from readily available wood. The numerous sail makers found in these maritime communities readily fabricated the sails. Of the two millstones, one was stationary and the other turning. These stones, often made from volcanic rock, were acquired during trading expeditions to the West Indies, frequently from the island of Martinique.

Another Pamlico River mill was located at the mouth of Washington’s Jack’s Creek and placed on a spit of land formerly known as Windmill Point. Historically, Jack’s Creek went by the name of Windmill Creek. A North Carolina Historical and Genealogical Register passage describes the 1788 tomb of Captain John Bonner, son of Washington founder James Bonner, as being found on Windmill Point. An early 1826 deed describes the corner of a plantation belonging to Benjamin Runyon (for whom Runyon Creek is so named) as “…Beginning at a hickory standing on the side of a small creek which empties into the river at the windmill,” the small creek being today’s Jack’s Creek. In his November 24, 1939, Washington Daily News column, John Bragaw quotes Mr. Henry Blount discussing Windmill Point, “Years ago, I asked my father why the point was called Windmill Point. He said he had been told by older people that there used to be a windmill on the point that ground corn for the public. He told me the creek was also named Windmill Creek. In later years, in talking about the land grants in that section from the King of England, he again called it Windmill Creek, stating that it was so recorded in the county records at the court house.”

Blount continues by recounting an 1890 deed describing a property adjacent to the creek as “the Windmill Point land bounded on one side by Pamlico River, on another by the McNair land and on the east by Windmill Creek.” Clearly a windmill did exist at the mouth of Jack’s Creek, possibly built around the beginning of the 19th Century, making it one of the earliest in North Carolina.

Was the millstone found on my friend’s lot from one of the two Washington mills? We may never know, but the land where it lays was once owned by the Fowle family, the landowners of the spot where one of the windmills once stood. Perhaps.