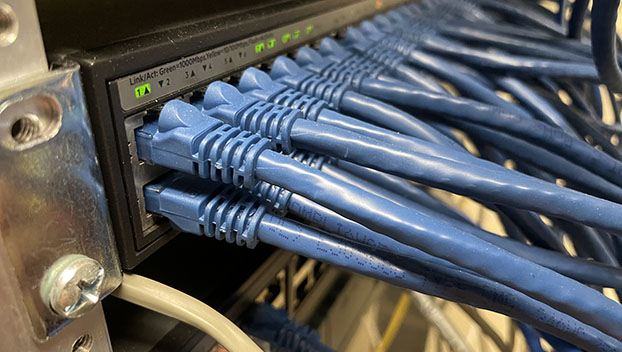 The Beaufort County Board of Commissioners on Monday earmarked $4 million of the county’s American Rescue Plan funds for broadband internet expansion in underserved areas of the county and initialized fact-finding endeavors for a couple of other projects that could also be eligible for funding.

The county government has received half of its $9.11 million intake from the Coronavirus State and Local Fiscal Recovery Fund, which is a part of the American Rescue Plan Act. The other half of that money will arrive in May 2022. The funds can only be used for specific purposes set forth by the U.S. Department of the Treasury. Generally, according to an interim final rule published by the Treasury, the money can be used to support public health expenditures; address “negative economic impacts” caused by the pandemic; replace lost public sector revenue; provide premium pay for essential workers; and invest in water, sewer and broadband infrastructure. A fact sheet detailing all of the permitted uses of the Recovery Fund money can be found here.

While discussing potential projects and hearing input from the public at several meetings over the past few months, the commissioners compiled a list of potential areas  and projects that they could earmark federal funding for — including broadband, solid waste, the county jail and other facility improvements, stormwater improvements, nonprofit support, relief for local fire departments and other first responders, and water system expansions. That list was narrowed down as county administrators researched whether each project was eligible to be covered by the federal money.

Broadband was the first permissible project the commissioners discussed during a work session Monday.

In March, the county entered into a five-year memorandum of understanding with RiverStreet Networks to “develop and establish policies and procedures that will promote and sustain a market for rural fixed wireless broadband availability or other economically feasible broadband option and intend to maintain a product and/or services that meets or exceeds all business or industry standards.”

With a 5-2 vote Monday, the commissioners approved John Rebholz’s motion to set aside $4 million to begin negotiations with RiverStreet regarding broadband expansion. More money for broadband could soon supplement those relief funds, pending current legislation on the state and federal levels.

“I think broadband provides the best return for the buck of the taxpayers of Beaufort County,” Rebholz said.

Hood Richardson and Stan Deatherage voted against the motion.

“I just don’t think we know enough about alternatives to start voting on anything,” Richardson said. “I think we need to discuss all of the alternatives, and then come back and put votes on it. (We’re) jumping off a cliff.”

“With this much at stake, with this much money being foisted towards communities, I think we need to take time to make the best decision we can,” Deatherage said. “We don’t know 100% that we cannot use some of this money for solid waste. We don’t know — in my opinion, that would be the greater priority. I think we need to know what priorities are in some kind of final order that we can all agree to. And then we decide what to do with the money. I’m not against broadband, but I am more in favor of what will affect more households in Beaufort County. That is solid waste.”

The commissioners also discussed using the relief money to extend the county’s water lines. The commissioners approved Richardson’s motion to have the public works department research and report back on which water lines need upsizing, which lines have been blocked off, and which areas across the county could use additional water distribution lines.

The possibility of providing relief funding for local fire and EMS departments was also discussed. Many of those departments lost revenue because the pandemic prevented them from holding their usual fundraisers. County Manager Brian Alligood said certain parameters set forth in the American Rescue Plan would need to be considered when evaluating how much revenue each of those departments lost.

The county will present those parameters to those departments and seek information from them regarding any loss of revenue they might’ve experienced during a Local Emergency Planning Committee Meeting next Monday.