Unnamed but powerful: the hurricane of 1913 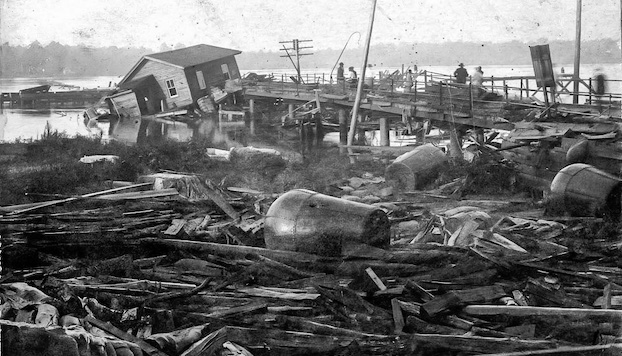 Those of us that have lived in Washington for the past twenty or so years aren’t strangers to dealing with tropical storms or hurricanes. Our town was hard hit by Hurricane Hazel back in 1954 and Fran and Floyd in the 1990s. Most recently, it was Hurricane Florence that caused extensive flooding in the town. But the mother of all hurricanes to strike Washington and do over $10 million in damage ($272 million in today’s dollars) was the Hurricane of 1913.

Weather forecasting was still an evolving science in 1913, but the U. S. Weather Bureau was improving its infrastructure to predict and track impending tropical storms. This movement led to, in 1901, the first building erected to house a U. S. Weather Bureau station in Hatteras Village, NC.

In tracking the storm, Meteorologist H. C. Frankenfield states, “On August 29 there was a slight pressure fall over the Windward Islands to the southeastward, and the fall probably drifted normally to the northwestward without attaining true cyclonic development until assisted by the heat and moisture of the Gulf Stream during the night of August 31-September 1.” Radiogram messages from ships indicated that the storm was only a few hundred miles off the coast of North Carolina. On September 2, the barometric pressure at Hatteras began to fall, and the winds and rain started along the Outer Banks; storm warnings were issued along the coast.

The storm came ashore at Cape Lookout on September 3 in the early morning. 74 mph winds were recorded at Hatteras. Damage was substantial from Cape Hatteras to Cape Lookout. Telegraph lines up and down the Banks toppled so damage reports could not be transmitted.

Numerous shipwrecks littered the Outer Banks. The British steamship, Glenaen, grounded in the breakers near Ocracoke’s south point, the Dewey at Cape Lookout, schooners Manteo and Grace G. Bennett near Portsmouth and the George W. Wells, a majestic six-masted schooner was ashore midway between Hatteras and Ocracoke Inlets.

The storm moved westward as it moved inland halfway between New Bern and Washington, parallel to the Pamlico River. That placed Washington in the dangerous right-front quadrant of the storm. As the storm approached the town, northeast to southeast gales caused the river to rise 10 ft above previous high-water marks. Winds measured between 90 and 100 mph. The pounding waves in the Pamlico caused the Norfolk Southern and Atlantic Coastline railroads to lose their trestles across the river. Water stood 5 – 7 feet on Market Street. Many residents found it necessary to take shelter in churches. Every bridge in the county except one in Aurora was destroyed. Two tugs and a dredge sank in the harbor along with many other boats. Sailing vessels and barges broke from their moorings and were found several miles from town. Following the storm, the city fire engine was kept busy just pumping out basements downtown.

Every business along the waterfront was knocked out by the storm. Estimated losses to some of the businesses in 1913 dollars:

After the storm, health concerns were a top priority. John G. Blount, Superintendent of Health for the county, placed the following announcement in the paper: “Every householder must clean up and lime their lots thoroughly. This work must be complied with by Monday night. If this is not attended to sickness will follow all the work of the storm.”

The storm was barely strong enough to be considered today a Category 1 hurricane. But like Florence, it took the worst path possible for Washington, just south and parallel to the Pamlico, funneling the waters of the river west and inundating Washington and the surrounding countryside.