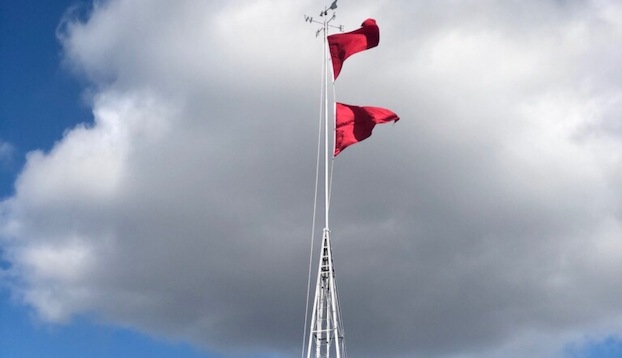 123 years ago, coastal shipping was still an essential method of moving goods to market. The Federal government recognized that a system was needed to warn boats and ships of threatening hazardous weather. Such a system was vital to the safety of mariners. Radio communication was not an option as it was still experimental. In 1898, President McKinley ordered the newly established U. S. Weather Bureau to set up a series of coastal warning display towers to supply the needs of the more important ports not having regular Weather Bureau offices. Being one of those crucial ports, Washington received one of the first towers, which now stands on the east side of the Mac Hodges Festival Park in Washington on the Pamlico River. But it hasn’t continuously stood there.

A coastal warning display tower, sometimes known as a storm warning tower, was a unique skeletal tower designed to display warning flags during the day and colored lanterns at night. The towers are the same structures used to support aermotor windmills so familiar to farms on the Great Plains.  The daytime flags consisted of eight-foot square red flags with black centers, one flown as a tropical storm warning and two flown as a hurricane warning. A single red pennant 8 feet by 15 feet was flown to indicate a small craft warning.

The individuals employed by the Weather Bureau to display the warnings were called storm-warning display-men and were often local residents. In addition to maintaining signals, display-men were expected to post a notice of storm warnings in prominent places on the waterfront and personally notify the ships in the port of any impending storm.

Records indicate that a storm-warning display and seacoast telegraph station were in place in Washington around 1900. The first storm-warning display-man in town was really a woman named Mary Gallagher. She was the wife of prominent town physician and amateur meteorologist, Dr. James Gallagher. Dr. Jim, as he was known, was the son of Dr. Fredrick Gallagher, who established in 1846 one of the first, if not the first, drug store in North Carolina on Main Street in Washington.

The Gallaghers built their home in 1904 at 629 East Main Street and named it “Point Breeze.” It was in their backyard where the tower was first erected. Mary Gallagher was listed in 1906 Weather Bureau records as the display-man and received $12/month compensation for her services.

Dr. Gallagher died in 1911, and for over 30 years, the widow Mary Gallagher had the sole responsibility of raising the storm flags. At 88, Mary was still listed in the 1940 census as employed by the U. S. Weather Bureau. Mary died in 1944 at the age of 91.

Upon Mary Gallagher’s death, the tower was moved to Mrs. Lossie Waters’ backyard at 720 East Main Street, who assumed the responsibility of storm-warning display-man for the tower. According to her granddaughter Linda Waters, Miss Lossie would receive a phone call from the U. S. Weather Bureau in Norfolk, VA, as bad weather approached the Pamlico. It was often the “small craft” red pennant that was raised. Yet, occasionally, the two red and black flags were ordered raised to indicate that hurricane conditions were imminent. Miss Lossie’s 40-year watch included several notable hurricanes, including Hazel, Ione, Diane, and Donna. Lossie Waters passed away in 1983 at the age of 94.

The National Weather Service discontinued the use of the coastal warning display towers in 1989. Of the hundreds of towers built, only two are still standing in North Carolina, ours in Washington, and the restored tower at Manteo.

Today the weather flags fly from the tower again to serve as an educational exhibit and a reminder of Washington’s historic maritime past. Perhaps when visitors to the waterfront view the tower, they will be reminded of the untiring effort made by Mary and Lossie for over 80 years to alert the sailors on the Pamlico.