History of the U. S. Coast Guard Auxiliary in Washington 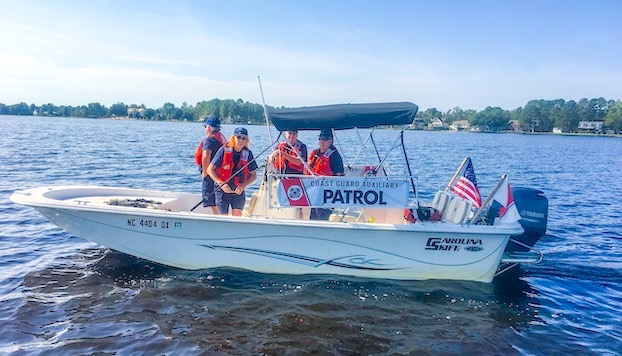 Today I wish to share the history of the U.S. Coast Guard Auxiliary in Washington, NC. I have been a member of the local Flotilla 20-06 for the past 6+ years. I am very proud of my shipmates’ job in educating the public on boating safety and the work they do in assisting mariners in distress on the Pamlico and Pungo Rivers.

Boating always has been one of America’s favorite pastimes. Rowing and yachting races were among the most popular spectator sports through the 1930s. The wealth generated in post-Civil War America and the growth of railroads spurred the development of resorts, country homes, and the suburbs, all places to go boating.

The Federal Government began to construct large dams, reservoirs, and lake systems during the Depression, adding waterways. With the development of the single-operator motorboat and the outboard engine at the turn of the 20th Century, the number of recreational boaters skyrocketed.

In 1939, the Coast Guard reported that more than 300,000 boats were operating in Federal waters. In the previous year, it received 14,000 calls for assistance and responded to 8,600 “in peril” cases, a record number. Boaters needed better training in seamanship and Federal law. At the same time, civilian yachtsmen were pressing the Coast Guard to establish a volunteer arm of the service.

As a result, on June 23, 1939, Congress passed legislation that established the Coast Guard Reserve to promote boating safety and facilitate the Coast Guard’s operations. Groups of boat owners were organized into flotillas within Coast Guard Districts around the country.

Members initially conducted safety and security patrols and helped enforce the 1940 Federal Boating and Espionage Acts. Then in February 1941, the volunteer Reserve was renamed the U.S. Coast Guard Auxiliary.

Following America’s entry into World War II, recruits flooded into Auxiliary flotillas in a burst of patriotic fever. In June of 1942, legislation allowed Auxiliarists to enroll in the Coast Guard Reserve on a part-time, temporary basis.

Throughout the war, some 50,000 Auxiliarists constituted the core of the temporary Reserve membership. They performed coastal defense and search and rescue duties. They patrolled bridges, factories, docks, and beaches, fought fires, made arrests, guided naval vessels and conducted anti-submarine warfare. Meanwhile, thousands of active duty Coast Guard personnel were freed up for service overseas.

In August 1943, Flotilla 20-06 was established in Washington, NC, with the designation of VI-04. Initial membership was 16, along with eight boats available to assist the regular Coast Guard. The flotilla’s charter was delivered to Roy Mayo, the first Flotilla Commander in a ceremony held at the old Knotty Pine restaurant in Washington.

The flotilla initially met at the Washington Park Service Station and later in a second floor meeting room in the Pamlico Chemical Company building. By February 1945, the Washington Flotilla had grown to 53 members and 16 boats.

Today, the Flotilla 20-06 education program trains tens of thousands of boaters yearly in seamanship, piloting, rules of the road and weather, among other topics. Specially qualified coxswain and crew members conduct search and rescue missions in their own boats and support other Coast Guard missions.