Cousin Rasmus to the rescue: a medal-winning tale 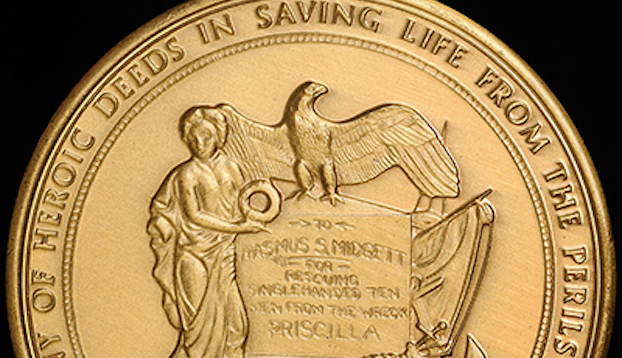 Commemorative medal honoring Rasmus Midgett for his actions as lifesaver of the wreck of the Priscilla.

This week I want to share a story of the heroism of my Outer Banks distant cousin, Rasmus Midgett (1851–1926). Like many men on the Outer Banks, he chose to serve as a surfman in the U.S. Lifesaving Service.

In 1897, the barkentine “Josephine,” owned by the C. Morton Stewart & Company of Baltimore, was ready to sail from Rio. But before she could get underway, her captain fell ill. The first mate, Benjamin Springsteen, was placed in command. Catching strong trade winds, “Josephine” and her new captain made good progress, at times topping 15 knots. Her record-setting voyage from Rio de Janeiro to Cape Henry in just under 22 days brought accolades for Springsteen. C. Morton Stewart rewarded Springsteen by appointing him skipper of the newest of his “coffee” fleet, the “Priscilla.” But, overshadowing his accomplishment was the discovery upon his arrival in Baltimore that his youngest son was near death and would soon perish. It was the first of many tragedies to haunt Captain Springsteen.

On August 14, 1899, the weather along the North Carolina coast was fair; winds were light and out of the southwest. Puffy cotton balls of cumulus clouds scudded along over a sapphire blue sea, not unusual for mid-August. But Rasmus Midgett knew that the calm could be deceiving from spending a lifetime on Hatteras Banks. Light just days before, the surf was steadily building toward six to eight feet and beginning to break on the outer bar. Sure signs that a storm, still several hundreds of miles away, was threatening his island. Rasmus sensed that he and his shipmates at the Gull Shoals Lifesaving Station would soon be called upon to put their lifesaving skills to the test.

That same day, Captain Springsteen, now in command of the “Priscilla,” squared away towards Rio De Janeiro, hoping under a fair westerly to avoid the hurricane he knew was brewing somewhere to the south. With Captain Springsteen was his wife, making her first sea voyage, his two remaining sons, William and Elmer, and a 14 years old passenger.

As they headed south, none aboard could imagine what horrors awaited them in what was to become known as the San Ciriaco hurricane.

By August 17, the sea was angry, and Priscilla was sailing into a raging cauldron. The “Baltimore Sun” describes what happened next, “The skies were overcast, the seas rising, and her sails were torn away, one after another. There was no time to cast off sheets or halyards or to man downhauls, and it was only a matter of seconds before the Priscilla was stripped of every sail and racing onward under bare poles. For a time, Captain Springsteen fought to keep the Priscilla under control, and seaman after seaman struggled with the kicking wheel. However, it was impossible, and the captain, seeing the danger, ordered all hands aft on the quarterdeck for greater safety. Just as the last man arrived, a vast comber reared up ahead of the Priscilla. It poised for a moment, then came crashing in over their heads and roared aft, filling the well deck with froth-crowned water and bringing up with a thud with the break of the poop, to go charging off over the side.” Captain Springsteen’s wife and his two sons and one crewman were washed away. The hull broke in two, and the crew assembled on the aft part. The sea continually swept the aft section, and it finally settled near the shore.

At 3:00 am on the now stormy, windy, and rainy morning of August 18, Surfman Midgett left the Gull Shoals station on beach patrol on his horse Gilbert. Like many islanders, Rasmus made his living as a fisherman and only worked as a surfman during storm season. Gull Shoals Life Saving Station was several miles south of his home in what today is known as the village of Waves.  Midgett and the rest of the station crew had worked with two other teams just the day before to rescue the schooner “Aaron Reppard” so Rasmus was still recuperating.

Historian Kevin Duffus describes what happened next “Approximately three-fourths of a mile from the station; he saw items newly washed ashore, which indicated a shipwreck. A vessel had keeled over approximately 25 feet from shore. Midgett could see men clutching to remaining wood approximately 100 yards from him. It was approximately 4:30 am.”

Midgett had to make a difficult decision: spend three hours bringing assistance from the station or attempting a rescue alone. Midgett chose the latter and waited until a wave had receded, then ran as close as he dared, yelling instructions to the shipwrecked men. He told them that one man should jump off the floating debris and head towards the shore on his command, with Midgett assisting. Six times Midgett ran forward, calling for a man to jump. He then helped the man reach the shore, pulling him through the waves. Three men were remaining in the water, but they were too exhausted to swim towards shore. Midgett fearlessly entered the sea, and one by one carried each remaining man to the beach. The seven men who could still walk began heading towards the station at Midgett’s direction. At the same time, he cared for the remaining three, including Captain Springsteen, who survived the shipwreck but sadly would die in less than a year after losing his remaining son to another shipwreck.

For the rescue, Rasmus Midgett was awarded a Gold Lifesaving Medal by the Secretary of the Treasury. The inscription reads on one side: To Rasmus Midgett for rescuing singlehanded ten men from the Priscilla, August 18, 1899. And on the other: “In Testimony of Heroic Deeds in the Saving of Life from the Perils of the Sea.” Midgett received the award on October 18, 1899.