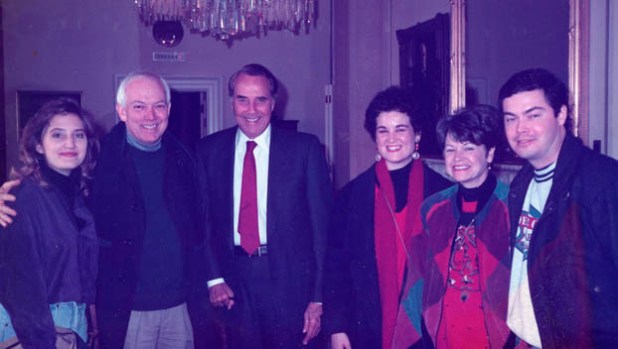 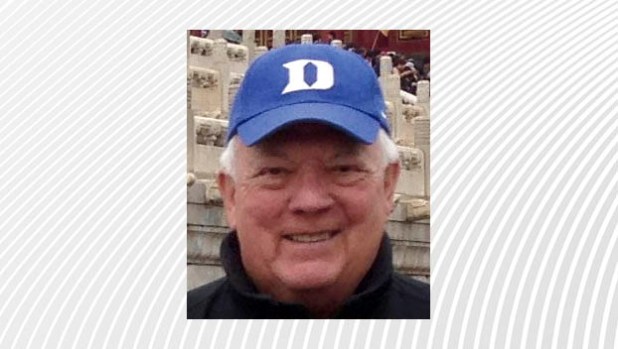 It wasn’t planned but I’m so glad it happened. We were being given a grand tour of the U.S. Capitol by House Chaplain Jim Ford. He’d promised me this inside look after we’d conducted the funeral in Raleigh of a mutual friend. Our son & his wife were going to the DC area the next week for him to be in a fraternity brother’s wedding, so we and our daughter joined them and we were all being given the promised great tour. Chaplain Ford, formerly at West Point, was a convivial host, stopping in the hallways to introduce us to various senators and representatives and to share jokes & funny stories. Suddenly, as we were walking past the Senate Majority Leader’s Office, I looked back & saw my wife waving to Senator Bob Dole who was seated at his desk in his inner office. Apparently he made it a habit to keep both office doors open in case anybody walked by and wanted to exchange a wave with him. When he saw that my whole entourage had stopped to peek in, he stood, smiled, & waved us into the inner sanctum. For the next several minutes we chatted about Kansas, NC, the United Methodist Church (both he and Elizabeth had grown up Methodist and were attending Foundry UMC in Washington along with Bill and Hillary Clinton), and Duke & Kansas basketball. I learned that Elizabeth was serving on the church’s personnel committee where they’d recently had to ask the bishop to dismiss their pastor due to some extracurricular activity and how that was a sad chapter for all concerned. We found him to be winsome, handsome, gracious, and nothing at all like “the hatchet man” he and President Gerald Ford had asked him to play when they ran against Jimmy Carter & Walter Mondale years earlier. I later read his humorous comment on how his debate had gone with Mondale: “I went for the jugular, but hit mine instead.” He Joined us for a souvenir photo before we rejoined Chaplain Ford and we left with a great new appreciation for this man who soon ran well for president.

Shortly after our visit, Senator Dole began financially preparing for leaving the Senate and allowing his humor to go public by making commercials for VISA Cards that poked fun about his having to prove his identity even in his hometown of Russell, Kansas, population 2000. Five years later, he made TV history by becoming the pitchman for a new drug for males, Viagra, and followed that with Pepsi commercials sometimes with Britney Spears. You can find these on YouTube and get a good laugh along with him. My wife teased his wife at a Final Four Brunch about the commercials, and she chuckled and said she’d advised him they were not dignified enough to suit her. We countered that they’d help to make him more human &and likeable even to those who weren’t Republicans.

Watching his beautiful funeral today held in Washington’s National Cathedral, I gave thanks for these uplifting, very dignified services we use to say farewell to our most distinguished leaders, and for the not-so-famous. The multiple speakers, soloists, congregational hymns, sermon by the current Senate Chaplain who is also the first Seventh Day Adventist to hold that office, were all marvelous. I’ d just re­read two books by Tom Long, a favorite preacher/professor/author, on how we need to recover the dual emphasis on celebrating the life of the deceased and the promise of eternal life in Jesus Christ for believers. That was done in spades. And Barbara and I repeated with the liturgist a favorite commendation from the liturgy Methodists & Episcopalians share: “Into your hands, O merciful Savior, we commend your servant Robert. Acknowledge, we humbly beseech you, a sheep of your own fold, a lamb of your own flock, a sinner of your own redeeming. Receive Robert into the arms of your mercy, into the blessed rest of everlasting peace, and into the glorious company of the saints of light. Amen.” Rest in peace, Bob Dole. You led an exemplary life, and all Americans are proud of you.

Charles Michael Smith is a retired United Methodist minister who lives in Washington with his wife.