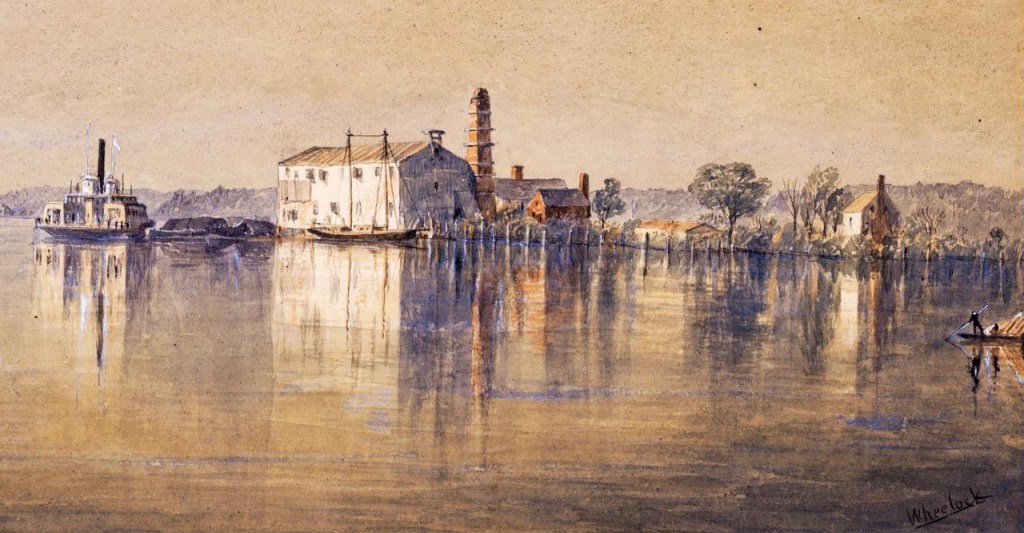 I’m a member of an informal workout group that meets most weekday mornings, rain or shine, hot or cold, at the Mac Hodges Festival Park under one of the shelters. About half of us qualify as senior citizens, so we’ve dubbed ourselves the “gazebo geezers.” Besides the opportunity to get the blood moving and share the camaraderie, we get to enjoy watching the morning activity of walkers and the occasional boat.

One morning this past September, following my workout, I noticed a large van unloading many people on Water Street at the NC Estuarium. They were carrying what appeared to be scuba gear as they headed for the boat slips by the Estuarium. My curiosity was piqued, so I made a beeline down to the waterfront to see what they were about.

I discovered that they were graduate students in ECU’s Maritime Studies Program. They were participating in a field study of the underwater remains of the sunken vessels lying on the bottom of the Pamlico River off of Washington. But a small number were assigned to do some terrestrial investigating of any ruins found on Castle Island. I was thrilled when they invited me to meet the group on the island later that day. I called my friend and local historian Blount Rumley and asked if he wanted to go along, and he immediately responded, “You bet.”

The island has been the site of many industries, from warehousing, shipbuilding, and early on the home to a lime kiln used to make quicklime from discarded oyster shells. The quicklime was used in creating plaster and cement. Legend has it that the island’s name derives from the fact that the kiln’s tall smokestacks and structures appeared from a distance to be a castle. Thus, the title Castle Island or, as it was known in the 19th Century, just “The Castle.” This reference to the island first appeared in 1818 when the New England brothers Josiah and Luke Fowle were described as “having established a shipyard, …on the island called ‘The Castle’ in front of the Daniel Marsh home.” Quicklime production on the island persisted into the early part of the 20th Century.

Castle Island has also been the site of activity directly associated with conflict. During the Revolutionary War, the brothers John and Thomas Blount built warehouses on the Island used by the Continental Army to store supplies. During the Civil War, the Union forces constructed a gun battery on the island to contend with the Confederate batteries on the south side of the river.

Castle Island has been a favorite site for pyrotechnics, not only during times of war. When I first came to Washington in 2005, the July 4th fireworks display launched from the island. A June 23, 1892 issue of The Washington Gazette stated, “HALF HOUR DISPLAY FIRE WORKS. On the Castle at 8:30 p.m. sharp. All free to every body (sic), except the sum of 15 cents will be charged boys and men to see the game of ball.”

Several sawmills were established on The Castle. By 1860 a two-story sawmill, over 80 ft. long, processed lumber on Castle Island to supply scantlings (or lumber for framing) of the vessels under construction at the nearby shipyard. Sawmills continued to occupy the island into the early 20th Century.

The shipbuilding trade thrived on The Castle into the late 19th Century. The March 30, 1893 issue of The Washington Gazette announced, “The Government (most likely the US Army Corp of Engineers) has leased the Castle and will, establish a ship building and repair shop there for the service.” The August 8 issue stated, “The new government steamer which is being built on the Castle will be launched at an early date.”

Over time, the island has changed. Storms and floods have reduced the size of the land. In the 1930s, the Army Corp of Engineers deepened the channel along the Washington waterfront by dredging. The sand pumped from the bottom of the river was deposited between Castle Island and the railroad trestle. Today, the island created has merged with the original Castle and metamorphosed into one continuous landform.

Later that day, Blount and I launched my boat and made our way to Castle Island, tying up beside the ECU vessel moored to the shore. Working our way along the path that the students had hacked through the dense undergrowth, we found the group hard at work measuring and documenting a large mound of bricks. The masonry pile was 40 to 50 feet long and six feet high. I asked what the structure was and was told it was the remains of the lime kiln! Still visible were several of the kiln chambers used to “burn” the oysters. A long iron rod used to strengthen the system still ran through each chamber. It was exciting to see the remains of the structure that had made the island such an icon.

The ECU professors leading the field study informed us that mapping the ruins on Castle Island was just preliminary with the hope that a future graduate student would research and write a thesis on the many industries that called the island home. I hope that occurs so we can grow our understanding of The Castle’s past.