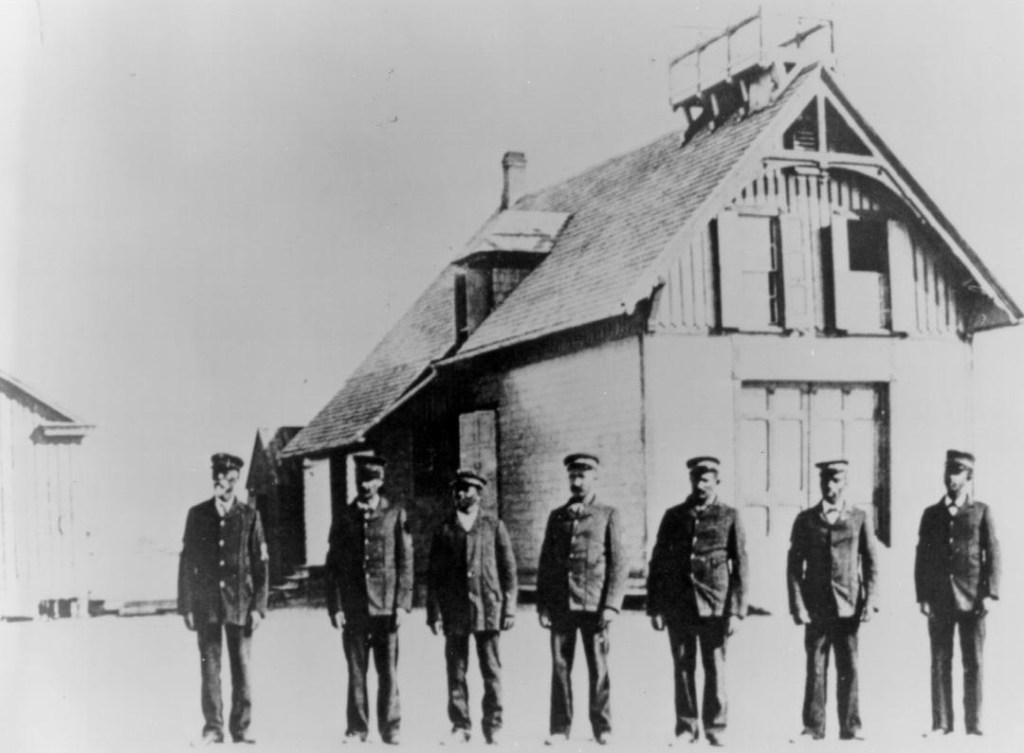 As a boy, on travels with my father down the Hatteras Island highway today known as NC Highway 12, we would pass the abandoned Coast Guard life-saving station at Pea Island, on the northern tip of Hatteras. The Coast Guard is the successor of the U.S. Life-Saving Service. Being a Coast Guardsman, Dad would note that an all African-American unit crewed the station and how unique that was. The facility is no longer on the beach as time and rising sea levels have forced the structure’s relocation.

The story of how the station became the only racially segregated unit in the Coast Guard begins with one man, Richard Etheridge. Born into slavery on January 16, 1842, Etheridge was raised on Roanoke Island. By 1862, the occupying Union Army on the island had freed the enslaved inhabitants and the Federal forces began recruiting from the African-American residents.

Hence Etheridge decided to enlist in the Second North Carolina Colored Volunteers and was appointed as a sergeant in Company F, serving in Virginia and Maryland, eventually mustering out in Texas.

After the Civil War’s end, Etheridge returned to Roanoke Island, to work as a “surfman” in the newly formed Life-Saving Service. He served on several integrated or “checkerboard” crews, first at Oregon Inlet in 1875, then Bodie Island in 1879.

Tragically in November of that same year, the mixed-race unit of nearby Pea Island Station mishandled a rescue effort with a significant number of casualties among the shipwrecked crew.

The Revenue Cutter Service investigated the situation and fired the “keeper” or station captain. Because of his military leadership experience and superior boatmanship, Richard Etheridge was appointed as keeper of the station.

The officer who advised his appointment, First Lieutenant Charles F. Shoemaker, stated that Etheridge was “one of the best surfmen on this part of the coast of North Carolina.” After Etheridge was appointed, the white surfmen were transferred to other stations. To fill the positions, Etheridge was directed to recruit local African-American men. Keeper Etheridge immediately developed stringent drills that enabled his team to excel in all life-saving tasks. Pea Island Station thus earned the reputation of “one of the tautest on the Carolina Coast.”

Under Keeper Etheridge’s leadership, Pea Island station participated in numerous rescues. Still, the most daring rescue that Keeper Etheridge and his team performed was the recovery of the crew of the three-masted schooner, the E.S. Newman.

The Coast Guard Historian’s office describes the events of the shipwreck, “En route from Stonningham, Connecticut to Norfolk, Virginia, the vessel was blown 100 miles south off course and came ashore on the beach, two miles south of the Pea Island station. The storm was so severe that Etheridge had suspended normal beach patrols that day.

But the alert eyes of surfman Theodore Meekins saw the first distress flare, and he immediately notified Etheridge, who gathered his crew and launched the surfboat. Battling the strong tide and sweeping currents, the dedicated lifesavers struggled to make their way to a point opposite the schooner, only to find there was no dry land.

The daring, quick-witted Etheridge tied two of his strongest surfmen together and connected them to shore by a long line. They fought their way through the roaring breakers and finally reached the schooner. The seemingly inexhaustible Pea Island crewmembers journeyed through the perilous waters ten times and rescued the entire crew of the E.S. Newman.”
For 100 years, the daring rescue remained obscure. But in 1996, a P. S. Jones Middle School 8th grader, Kate Burkart, read about the daring rescue as part of a school history project.

Miss Burkart stated, “When I found out they had not received any commemoration for their heroic rescue of the E.S. Newman, I immediately felt I had to do something about it.”

She did, by writing letters to Governor Hunt, President Clinton, and N.C. Senator Jesse Helms. Senator Helms was so impressed with Miss Burkart’s efforts that he initiated a congressional inquiry into the lack of recognition.

The investigation, Miss Burkart’s letters, and the actions of Stephen Rochon, an African-American Coast Guard commander stationed in Baltimore, convinced the Coast Guard to posthumously award the Gold Lifesaving medal to Etheridge and his crew. Three hundred people attended the award ceremony, with Kate Burkart serving as a keynote speaker.