Washington becomes a center of shipbuilding 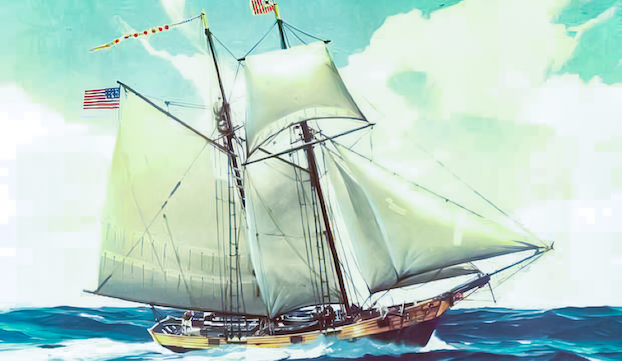 Following the nation’s birth, Washington continued as an important center of commerce for eastern North Carolina. Exports from the plantation along the Tar River to Washington included pork, corn, oats, peas, rye, potatoes, flax, tobacco, and naval stores. Commission merchants established essential trading relationships with the large northeastern cities and the West Indies. Agricultural products were shipped north, and manufactured goods came south on the return trip to Washington. Lumber and naval stores were sent south to the islands, and the returning ships brought sugar cane, molasses, and fruits.
In 1790, Congress passed several acts to authorize the collection of customs taxes or tariffs on goods transported across international borders. At important trading centers, the Federal government established ports of entry, including Washington, with collectors of customs appointed to gather the taxes. In addition, the nation authorized the construction of 10 revenue cutters to enforce the customs law. The cutters formed the Revenue Marine Service, later the U. S. Revenue Cutter Service, the forerunner of the U. S. Coast Guard. Because it was a shipbuilding center, the service chose Washington to construct one of the cutters named Diligence.
During the period 1815 to 1830, shipbuilding declined in Washington. Abner Neale and Jonathan Havens were the only shipbuilders able to maintain a stable business. Neale’s shipyard located his enterprise on Castle Island. The 1820 census list 14 men employed in the two shipyards.
A resurgence of the industry after 1830 sees shipwrights actively constructing vessels in the area, including Captain Hezekia Farrow and his son Joseph. The Farrows’ built the first marine railway in Washington near today’s Mac Hodges Festival Park. The 1840 census lists five shipbuilders: Abner Neale, Burton Shipp, Benjamin Styron, William Tannahill, and Hull Anderson. Anderson was a former enslaved person and established his shipyard adjacent to the Tar River along the 500 block of West Main Street and operated it between 1830 and 1841. Though his business was prosperous, Anderson chose in 1841 to leave Washington and emigrate to Liberia with his wife and children. In 1835, Tannahill built the first steamboat constructed in Washington, the E. D. McNair. Several trades connected to shipbuilding flourished, including ship outfitting, logging, naval stores production, and handling cargo as commission merchants.
By 1845, Washington had established its place as a major shipbuilding center in the southeast. In 1847, the first locally operated steamboat, Oregon, arrived in Washington from yards in Baltimore. (Side note: Oregon Inlet along the Outer Banks is named for this vessel as she was the first craft of any size to pass through the cut.) By 1849, the Washington firm John Myers and Sons had built two steamships, Amidas and Governor Morehead. An 1845 article in the Tarboro Press states that “Washington is a delightful place… wharves and shipping give it the appearance of a commercial city… Mr. Farrow has two vessels underway… two are being built down the river by Paul Cornell…” (Another side note: Paul Cornell was a shipwright in New York. The latter came to eastern North Carolina to pursue his profession. And was the cousin of the co-founder of Cornell University, Ezra Cornell.)
In 1850, Washington ranked as the number one shipbuilding center in North Carolina. The 1850 census documented 23 actively employed in shipbuilding living in Beaufort County. These builders constructed large tonnage ships, including the G.R. Dixon, a 209-ton schooner; Queen of the South, a 305-ton schooner; and the Pathfinder, a 428-ton schooner. The most productive years for Washington shipbuilders were between 1855 and 1856.
Washington’s growth appeared to slow very little until the catastrophe ensued, known as the American Civil War.

Next time: The Civil War and Beyond

Ray Midgett is a Washington resident, a local historian and the president of the Historic Port of Washington Project.