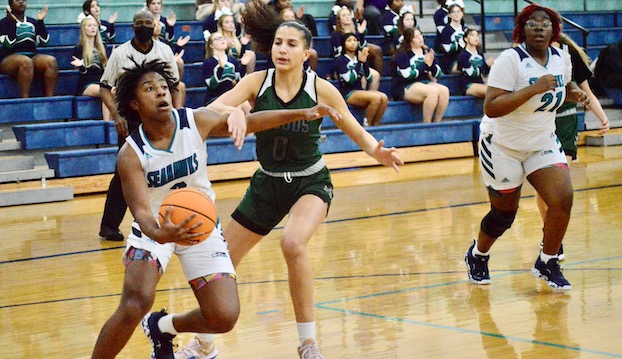 The post-season honors are starting to roll in for Southside junior Ka’Nyah O’Neal as the North Carolina Basketball Coaches Association named her to its five-player District 1 first team for the second straight year.

O’Neal was selected as a sophomore and followed up with an even better year by averaging 31.7 points, 13 rebounds, five steals and three assists from her guard position.

She was often the only upperclassman on the floor and led the Seahawks to a 1A state playoff spot with a 13-8 record.

“It’s great to see that people noticed how much hard work she’s put in,” coach Milton Ruffin said. “She was a terrific teammate and helped our younger players improve every day. It’s great recognition for her because we asked her to do about everything and she did.”

O’Neal scored her 1,000th career point in December, had a school record with 55 against West Craven and also scored 50 later in the season.

There are 12 districts spanning from east to west across the state and the coaches vote on the top 15 players in each district regardless of classification and split them into three teams.

O’Neal Is the only junior on District 1 first team. Hertford County’s Desiree Askew was the player of the year. Riverside’s Kearykwah Jones and Bertie teammates Yazmonasia Boone and Jessica Stokes completed the first team.

No Beaufort County players were on the second or third teams or among the boys selections.