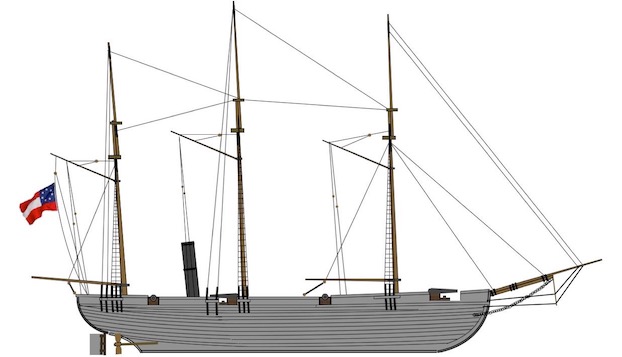 The Washington Confederate gunboats were similar in design to the CSS Chattahoochee.

The most productive years for Washington shipbuilders were between 1855 and 1856. The port’s growth appeared to slow very little until North Carolina seceded from the Union on May 20, 1861, to begin its involvement in the Civil War.

Now part of the Confederacy and the home of several successful shipbuilding firms, Washington drew the attention of the Confederate Navy. In October 1861, the Confederates signed a contract with two Washington shipbuilders, Ritch & Farrow and Myers & Company, to build three wooden gunboats to aid North Carolina’s coast defense. The Ritch & Farrow firm was to complete one vessel at $13,200, and the Myers firm contracted to construct two at $16,000 apiece. When finished, these vessels were to be similar to the CSS Chattahoochee, 130 – 150 feet in length, 25-foot beam, and a draft of 8 feet. Construction of the ships began in earnest.

From the start, the gunboat projects encountered difficulties. Building ships in Washington required help from industries located in other Confederate states. Because of the war, marine machinery was in short supply. Finding suitable engines proved challenging. The only machinery capable of powering the gunboats was in New Orleans. Since there was no railroad service to Washington before 1877, the only way to move the apparatus was by sea, an impossible task with the Union Navy blockading the North Carolina coast. Obtaining proper cannon and munitions was another problem for shipbuilders in Washington. Ordnance and shell were in short supply, with what was available allocated to ground-based forces.

Nevertheless, construction continued on the three hulls until March 1862, when the Union forces entered the mouth of the Pamlico River intending to capture Washington and put an end to the construction of the gunboats. When the invading army arrived on the Washington waterfront, two gunboats were still on the stocks but torched by Confederate forces to prevent capture by the Union. The only vessel complete enough to be launched was one of the Myers hulls. Before the arrival of the Union troops, the Confederates towed the unfinished ship up the Tar River to Chicod creek and scuttled her, perhaps with the hope of raising her at a later date. That never happened, and the remains of the relatively intact hulk still lie where she sank 162 years ago.

Ray Midgett is a Washington resident, local historian and past president of the Historic Port of Washington Project.