Is it Pamlico or is it Tar? 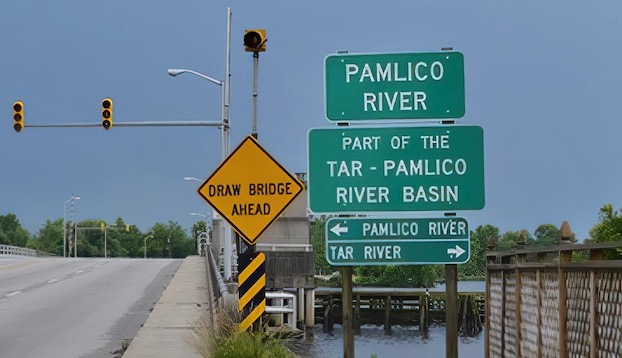 Visitors to Washington are often puzzled that the river that runs along the waterfront changes names as it passes the town. To the east of the old Highway 17 bridge, it shares the name “Pamlico” with the estuary into which it feeds. To the west, it is called the “Tar.” Why the name change? Here’s my hypothesis.

Suppose you were to peruse ancient maps of the area and its river. In that case, you would discover that maps before 1750 labeled the stream “Pamtico” as far west as Tarboro, at the time considered the frontier. As more settlers populated this backcountry, far removed from their countrymen along the lower Pamlico River, they began referring to the river by its Native Tuscarora name, the “Tau or Taw River,” meaning “river of health.” A map created as late as 1857 has the river labeled “Tau River.” The name eventually morphed into the designation “Tar.” By the latter part of the 18th Century, most, if not all, of the charts had settled on labeling the stream “Tar” to the west of Washington and “Pamtico,” “Pamptico,” or “Pamlico” to the east.

Mapmakers now had a dilemma: Where to divide the Tar River from the Pamlico? By the early 1800s, an enterprising businessman had spanned the river with a toll bridge following the same path as today’s old Highway 17 bridge. I suspect a map maker at the time found the bridge to be a convenient demarcation line for the up-river name and the down-river name. Once that 19th Century cartographer established the precedence, others followed suit, and the rest is history.