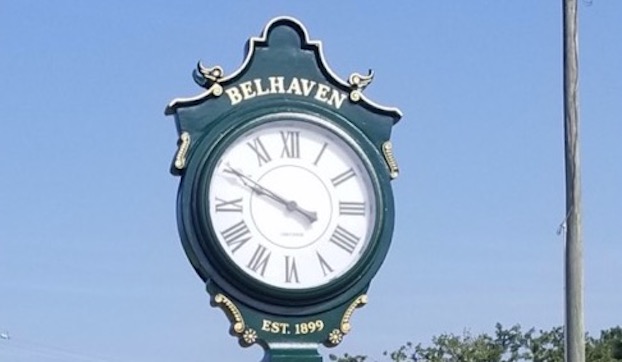 A clock like this one in Belhaven will be installed in downtown Washington sometime this summer. (Submitted)

Downtown Washington shoppers, pedestrians and drivers will soon have a new way to pass the time.

Members of the Washington Evening Rotary Club in partnership with the City of Washington will fund installation of a 15’5 foot tall, four-faces clock near the corner of Main St. and Stewart Parkway later this summer.

The Club turned 100 years old during the COVID-19 shutdown and waited until this year to celebrate their centennial with a gift of public art.

“We wanted to give something that the people of Washington, Beaufort County and visitors would enjoy,” Centennial Gift Committee chairman Brownie Futrell said. “Approval from the Historic Commission was a huge hurdle and thanks to the city, our funding is in place, so ordering the clock is the next step.”

“We think it’s a great idea and will really spruce up our downtown,” mayor Donald Sadler said. “We had leftover funds from the streetscape project and thought this project was a good use for them. The Evening Rotary Club has donated to a lot of non-profit organizations over the years and this is a great way to thank them for what they’ve done, while adding something neat to our downtown.”

The clock will be made by Lumichron, a Grand Rapids, Mi. company, that also made the clock for downtown Belhaven.

The clock features gold lettering on the header panel that will spell out Washington, back-lit dials with LED’s that allow it to light up from dusk to dawn, a roman numeral dial with the Rotary logo added and a GPS antenna inside the head. The concrete, circular pad near Main St. was installed during the streetscape project.

“We were sitting around brainstorming about what we could do and Tom said “how about a clock?”, Futrell said. “We’ve all visited other towns that have them and started talking about what it would look like. A two-faced clock was half the price, but we thought this one would be a better fit.”

In short, the project came together in a timely fashion.