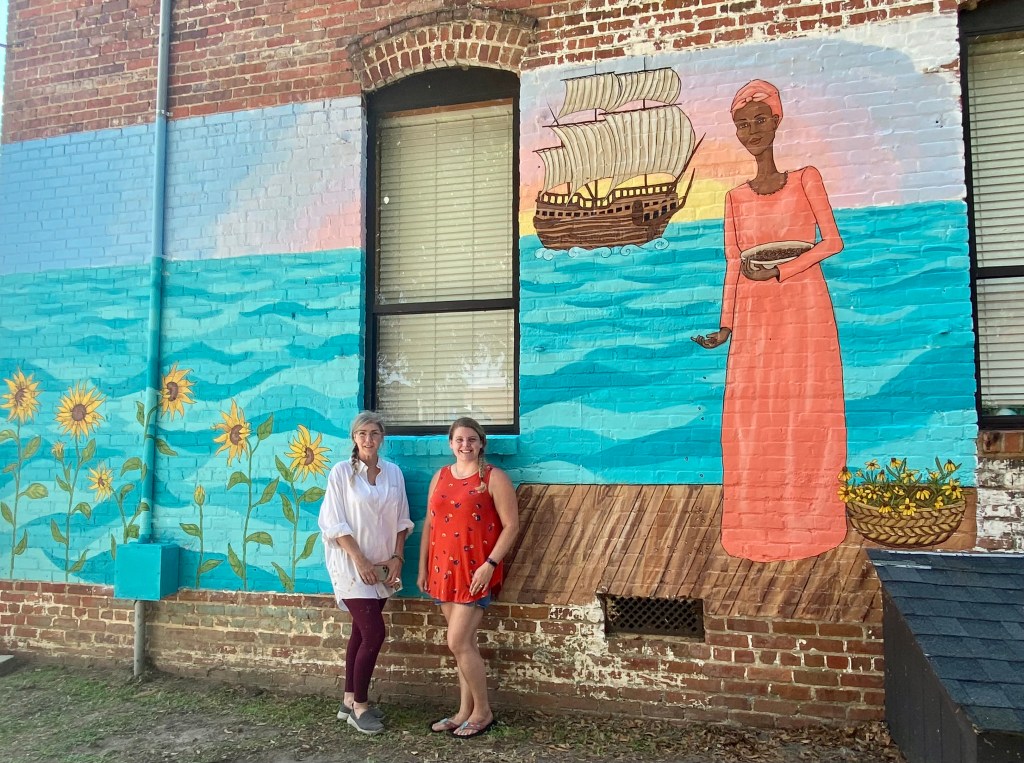 Colleen Knight (left) stands with Heather Summers in front of the completed mural located at the Corner of Gladden and West Main Streets in the Harbor District. Photo by Holly Morgan.

WASHINGTON – At first glance, the new mural in downtown Washington looks like a simple painting of a woman on a dock, but a closer look reveals much more.

The mural is located next to the Underground Railroad Museum at the Corner of Gladden and West Main Streets, or the orange caboose.

It depicts a scene from the Civil War Era of a black woman spilling black eyed peas on to a dock. A basket of black eyed susans is beside her and opposite are several sunflowers.

In the background, there is a large ship surrounded by water.

The black eyed peas and black eyed susans were codes used by abolitionists to tell freedom seeking enslaved people that there were too many eyes watching nearby and it was not safe to travel; however, sunflowers indicated that the area was safe.

Per a social media post published by the Art of the Pamlico Historic Turnage Theatre, the woman in the mural is named Rebecca.

“Rebecca will share stories of abolitionists movement and self-emancipation of freedom seekers throughout the summer.”

“Even through the idea of the codes is brilliant in themselves, it celebrates the diversity of people who worked together to either help establish the codes or leave the codes in places where freedom seekers could find them have them, how they protected the codes and how people work together to be able to pull off an endeavor like that,” Jones said.

“It’s not just about the code items which are really creatively brilliant in themselves, but the network of people that had to work together to make sure that all of these things came to fruition in terms of helping a freedom seeker.”

The mural was painted by local artist, Colleen Knight, with assistance from Heather Summers, program director and outreach coordinator for the Arts of the Pamlico.

It took two weeks to finish, they said.

The City of Washington gave Arts of the Pamlico $3500 that they matched and equal $3500 for murals around town, Summers confirmed.

Knight said she was “shocked” and “flattered” when she received news that she had been selected as the artist.

This was the first time Knight painted a mural.

She enjoyed the process and hopes to complete more murals in the future.

A storyboard will be placed in front of the mural at a later date to share the history behind the mural and the meanings behind the symbols.

The Washington Waterfront Underground Railroad Museum is open on Thursdays through Saturdays from 11 a.m. to 5 p.m. and by appointment.