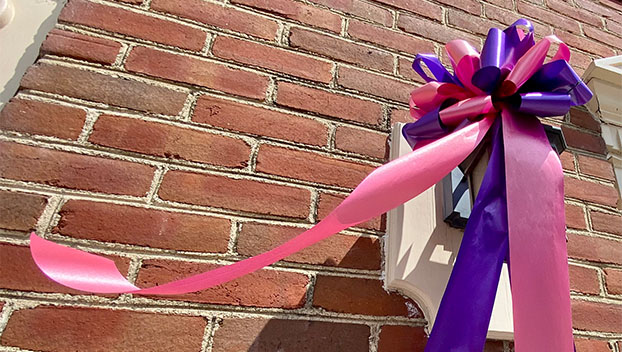 Purple and pink bows dot the downtown landscape in support of the Shepard Cancer Foundation. Photo by Holly Morgan

Bows made with purple and pink ribbons are popping up in downtown Washington and greeting patrons at the front door of small businesses. The purpose of the bows is to raise awareness surrounding all types of cancer as well as raise money for the Shepard Cancer Foundation.

Bows will be available for purchase throughout the month of June which is National Cancer Survivor Month. Because materials for the bows were donated by Page Wright of Blythe House, all proceeds will directly go to the Shepard Cancer Foundation. The foundation provides: free wellness and cancer screenings; complementary therapies (yoga, massage, journaling and art therapy); educational events and financial assistance so that patients can receive medical equipment, professional counseling, medical scans, wigs, prosthetics, lymphedema garments and more. Proceeds will also go toward the purchase of gas cards that will be given to local cancer patients so they can travel to their appointments and/or treatment. The foundation is tied to the Marion L. Shepard Cancer Center (1209 Brown St, Washington).

The Cypress Landing community brought the bows to life around 2014. They began by making purple bows. Then, Cypress Landing community members and board members from the foundation decided to add a purple and pink bow that brought in support from small businesses. The bows have raised a total of $95,000 in Beaufort County, according to the Shepard Cancer Foundation. Each bow costs $25. To order a bow, call either Marvin Alligood (252-945-4040), Stacey Lynch (252-944-5169) or Pansy Champion (757-286-5230).

Alligood, Lynch and Champion have personal ties connecting them to the foundation.

Alligood lost both parents to cancer, Lynch lost her mother to colon cancer but Champion has overcome cancer on three separate occassions.

Lynch’s mother, Linda Strader, was diagnosed around 2016 with colon cancer. When she was diagnosed it was a surprise, because she exhibited no symptoms despite the cancer being stage four at the time, Lynch said. Strader was at an appointment to see about surgery on her sinuses. The doctor performed a chest x-ray that showed spots on her lungs. Afterward, a PET scan showed a large mass in her colon.

“If she had not had sinus problems, she would have died and we would have never known why,” Lynch said.

Lynch took care of her mother for four years. In addition, Strader received care at the Shepard Cancer Center.

Since their time at the cancer center was before the COVID pandemic, Lynch was able to stay with her mother during her treatment. Lynch said the nurses and staff  talked to her as if she were a patient and explained what was happening during her mother’s treatment.

“It was a wonderful experience other than why you’re there,” Lynch said.

Champion was diagnosed with ovarian cancer in 2002. She was diagnosed again in 2017 and 2019. Around 2012, she moved to Beaufort County from Virginia Beach. Though she liked the medical facility in Virginia Beach where she was getting treatment, she prefers the Shepard Cancer Center.

Champion became a board member for the foundation. “For me, what I’ve been through, other family members, friends, people that I meet – I wanted to do everything I could to help patients that are going through it, survivors, their caregivers and encourage them to use this wonderful facility that we have here,” she said.

Champion, teary-eyed, said seeing the bows in downtown Washington was a “phenomenal” example of small town support. “It’ll make you cry,” she said.