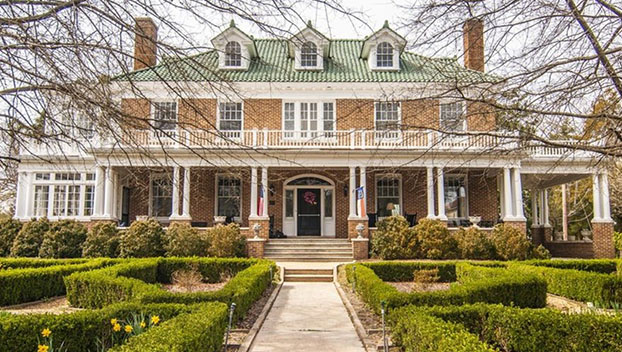 The Ell Hotel is located at 1040 N Market Street in Washington. The home, also known as the Bowers-Tripp House, was added to the National Register of Historic Places in 1999. Photo used with permission from Brabo.

Having moved from the Washington D.C. area, Ellen  “Ell” Brabo, 28, now calls Little Washington home. She redecorated, painted and added bathrooms to her physical home – transforming it into the Ell Hotel Bed and Breakfast and becoming the owner and innkeeper.

Located at 1040 N. Market Street, the Ell Hotel is also known as the Bowers-Tripp House which was built in 1921 by Benton and Benton from Wilson, North Carolina. In the last century the home has had five owners, one of them being Richard Tripp, a former mayor of Washington.

Brabo is a Virginia native and U.S. Army veteran. She was a public affairs officer from 2015 to 2020. In the military she had a high-energy and demanding job. Conversely, after she transitioned out of the military and took a temporary job in Washington, D.C. Brabo felt as if she had a lot of “idle time” on her hands, she said. She took a few side jobs that utilized her background in marketing and social media, but did not find it “very rewarding,” she said.

Brabo participated in a program called Boots to Business through Mississippi State University. “The Boots to Business program is a business course for veterans. The goal is to guide them through the transition from serving to becoming a business owner, covering topics like business plans and launching a product,” according to the program’s website. Military spouses and families can also participate. Boots to Business showed Brabo that she wanted to be her own boss and create something that resembled what she enjoyed about traveling around the world.

She went from being a traveler to a travel and tourism entrepreneur.

Brabo bought the Colonial Revival style home last year. She looked at several historic homes in Ohio and Texas; however, a close friend sent her a Facebook post featuring the Bowers-Tripp House and suggested she buy it. A year and one month ago, Brabo and her parents visited the home on a Sunday then she purchased the home three days later. She closed on the house on May 17, 2021.

“I will say, for a lot of it I trusted an instinct…I knew that I would just feel it in my bones…We walked through the house and I just knew. I was like, ‘this is it. This is where I want to be,’” Brabo said.

There weren’t too many things to fix around the 5,000 sq. ft. house. There was a leak in an upstairs bathroom which meant replacing old piping,  basic foundational repairs were made, a new sump pump was purchased, but Brabo had to make one major change to comply with North Carolina lodging regulations. Each room needed to have an on-suite bathroom. Brabo took out three closets to make room for the bathrooms.

This week, Brabo is putting the finishing touches on the hotel before a grand opening celebration on Saturday, June 18.

Guests at the Ell Hotel can expect a “social experience,” she said. There is a billiards room at the front of the house and a bonfire bit in the backyard. The front porch offers guests time to rest, converse and split a bottle of wine. The sunroom is filled with board games.

She doesn’t want guests to feel like they are staying in a museum or as if they have to tip-toe around the house because she lives there. “I want them to feel that my home is their home -that they can feel comfortable,” Brabo said.