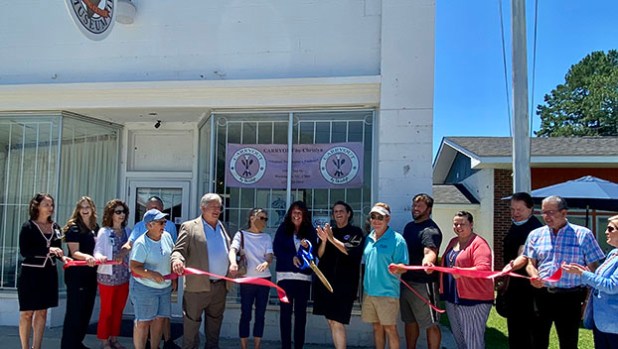 A ribbon cutting ceremony was hosted by the Washington-Beaufort County Chamber of Commerce on Wednesday, June 15. Cutting the ribbon were Cindy Crane (left) and Chrislyn Beresheim. Joining them were supporters and board members of the museum and employees of Carryout by Chrislyn as well as local officials. Photo by Holly Morgan 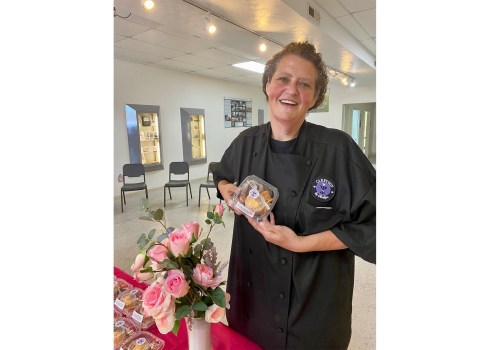 Chrislyn Beresheim showing a "much box" filled with samples of cheese wafers, Southern chicken salad, pimento cheese, a brownie and a gluten-free Cowboy Cookie all of which was prepared at Carryout by Chrislyn's in Washington. Photo by Holly Morgan.

The last time Aurora residents saw a restaurant on Main Street was when Lyndon B. Johnson was president, “Beatlemania” was rampant around the world and tie-dye shirts were en vogue. That all changed on Wednesday, June 15 with the addition of Carryout by Chrislyn at the Aurora Fossil Museum.

Washington based Carryout by Chrislyn (Carryout) partnered with the Aurora Fossil Museum to provide hungry residents and museum goers with snacks, sandwiches, salads and sweets. It will be open on Thursdays through Saturdays from 11 a.m. to 2 p.m. at the museum (400 Main Street).

Museum Executive Director, Cindy Crane, said the “community focused” museum has been “an anchor” of the town and can help bring business to the area. She anticipates positive reactions as businesses and restaurants begin to fill spaces on Main Street. “We love our community. We want to see it grow when possible,” Crane said.

The opening of Carryout in Aurora, Crane said, was a “momentous occasion.”

At a ribbon cutting ceremony on Wednesday, Chrislyn Beresheim, owner and chef, shared how the partnership came about. The ribbon cutting was hosted by the Washington-Beaufort County Chamber of Commerce.

“Oh my goodness I can’t believe that we’re actually here opening,” Beresheim declared. When talking to Crane about a potential second location in Aurora, she said “it just seemed like a wonderful idea to bring the two entities together.”

At Carryout, all of the ingredients are fresh and food items are prepared by hand. Beresheim is bringing the same level of care and attention to detail to Aurora residents and museum guests.

The partnership between the Aurora Fossil Museum and Carryout was fostered by the Washington-Beaufort County Chamber of Commerce.

Crane explained the Washington-Beaufort County Chamber of Commerce reached out to the museum inquiring about their level of interest in adding a restaurant. From there, many conversations between the museum, chamber and Carryout were held over the last year.

Adding that the arrival of Carryout makes the Chamber hopeful the Aurora community could see more businesses move to the area.

“…any type of investment in the community benefits the residents and encourages more of the same,” McKeithan said.

Chairman of the Aurora Fossil Museum Foundation Inc. Board of Directors, Bill Cook said Carryout’s arrival is “one of the first steps of the growth of Aurora” as well as the museum.

The ribbon cutting ceremony was held on the same day as the 44th anniversary of the museum’s establishment as well as National Megalodon Day.

The Aurora Fossil Museum is open from 9:30 a.m. to 4 p.m. on Tuesdays through Sundays.

“The Aurora Fossil Museum was founded in 1976 by a small group of individuals who had a vision to introduce and educate the public on the vast scientific discoveries that were being unearthed at the neighboring phosphate mine…the museum continues to provide a resource to educate on the geology, paleontology, and prehistory of coastal North Carolina,” per the museum’s website.