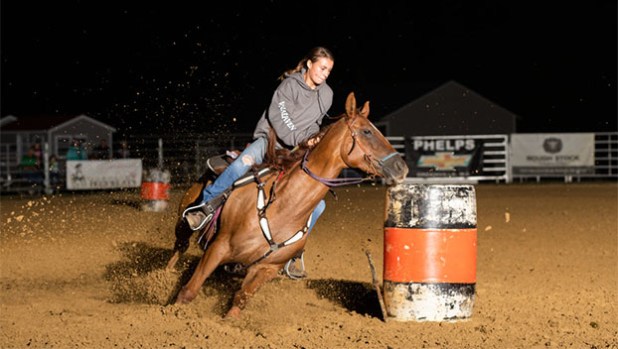 Jasmine Street and her horse Rocky competing in a barrel race event. Average time of a barrel race is between 15 and 30 seconds. Photo courtesy of Street. 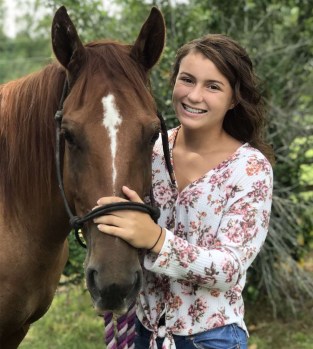 Jasmine Street with her six-year-old Quarter Horse, Rocky. His show name is Rockin in the Cash. Photo courtesy of Street.

Jasmine Street, of Blounts Creek, will compete next month in hopes to become a National Barrel Horse Association Youth World Champion. An impressive feat considering she is mostly self-taught and almost 19 years old.

The championship will be held in Perry, Georgia from July 22 – July 30. Winners are given money, belt buckles and for the top ten winners  – a new saddle. Thousands of people and horses will be there.

Street began riding horses at age ten when her family lived in Connecticut. Seeing her friends ride horses sparked an interest in Street. She “begged” her parents to let her take lessons. For her tenth birthday, her parents gave her a riding lesson.

“It wasn’t much. They led me around on a lead line, but I loved it. I kept going back every week,” Street said. When her family moved to North Carolina about two years later, she continued to ride at Little Fork Ranch, but felt riding in an English saddle wasn’t “fast enough.”

“I started off English – I liked English, but it was never fast enough for me. I didn’t get adrenaline from it,” Street said.

Barrel racing is a fast sport with quick turns requiring time skills and a lot of courage. Competitors are timed against each other to see who can complete a clover leaf pattern around three barrels. A thousandth of a second can separate who is first, second or third. The average pace of a barrel race is between 15 and 30 seconds.

“The barrels are placed in a triangle shape with the base closest to the alleyway (where the horses and riders enter). Barrel racers enter the arena at a full run, speeding towards the first barrel, choosing to go either right or left. After making a tight and complete circle around the first barrel, the rider must then race on to the second and third barrel to complete the cloverleaf pattern. Finally, the crowd cheers as the rider and horse bolt towards the finish line in hopes of stopping the clock with the fastest time,” Silver Spurs Rodeo explains on their website. Silver Spurs is the largest rodeo east of the Mississippi River in Kissimmee, Florida.

She learned how to barrel race from watching videos and taking advice from Camry Cauley Gardner of Little Fork Ranch and Patricia Everette of Nay Nay’s Peace of Heaven Horse Rescue. Today, Street is still self-taught. She takes advice from others and observes other racers at competitions.

“If you’re self-taught, it’s still okay to get help or tips from other trainers because it helps,” Street said.

Street competes with her six-year-old, sorrel, Quarter Horse named Rockin in the Cash, or Rocky. When she purchased Rocky, he was not “broke.” This means he has little training or experience being ridden. It took a year for Street to train Rocky to become a barrel racing horse. Before training him, Street said Rocky was a “grass ornament.”

Her primary concern at the World Championship is Rocky will respond to the lights, loud noises and many other horses, because he is young and could become overwhelmed.

Barrel racing requires horse and rider to be in sync working as a pair to achieve the fastest time. This means, Street has to be in a good emotional and mental place to be able to effectively communicate with Rocky. Horses are naturally empathetic animals and radiate their rider’s emotions. If the rider is confident and happy, then so is the horse. If the rider is scared or anxious, then so is the horse. Therefore, it’s important for Street to check how she’s feeling before a competition because it could affect her outcome. Also, being confident in the saddle increases her chances of staying safe while competing.

Mental and emotional well-being make up half of what it takes to be good at riding horses. The other half is exercise and practice. Street exercises Rocky every evening during the summer and/or in the mornings when it’s cooler. Occasionally they practice a barrel race, but Street spends her time “slow working” Rocky. Slow working allows a horse to keep their head lower and makes them more supple and relaxed. It teaches a horse to respond to light pressure demanding willingness and focus from the horse.

“If you don’t have a mindset to work your horse every day, it’s not going to work,” Street said.

Confidence and routine exercise steered Rocky and Jasmine toward placing within the top five spots at National Barrel Horse Association events. Those events happened throughout 2021. Placing in those events qualified them to compete at the World Championship. Street and Rocky won first place champion for their district, last year.

When she’s not riding, Street can be found either at school or teaching riding lessons.

She is studying Equine Business and Equine Training at Martin Community College in Williamston. With her dual-degrees, Street can start her own business or train horses.