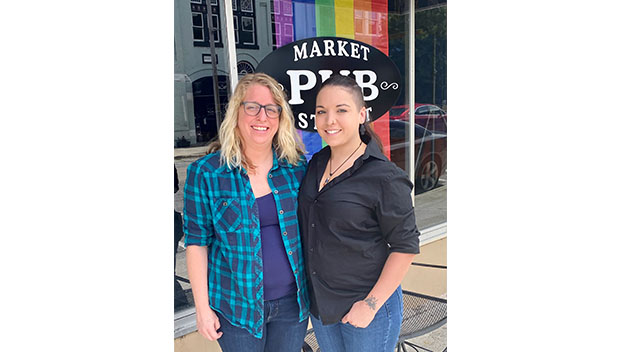 andy (left) and Lexi Gurkin stand outside Market Street Pub. They hope Washington residents can grow closer together and continue toward inclusivity. Photo by Holly Morgan.

Mandy and Lexi Gurkin hope their Pride event later this month will help all Washington residents grow closer together during a month celebrating inclusivity.

June is known as Pride month – a time when members of the LGBTQ+ population recognize and honor achievements or contributions made by individuals of the community while acknowledging discrimation they have faced while continuing to advocate for acceptance.

The Gurkins became the new owners of Market Street Pub (143 N Market Street) in May. On June 28, they are hosting “One Year of Pride at the Pub.” There will be eight drag performers and 12 performances. Each performer will do one set then pair with another performer to do a second set together. The event begins at 9 p.m. and there will be a $10 cover charge.

Last year, they hosted a drag performance at Market Street Pub. They were able to pull the event together in two weeks. Lexi shared that a group of a dozen gay, older men walked into the bar tearfully shaking Mandy and Lexi’s hands, because they created a safe space for the men to enjoy a drag show.

Lexi and Mandy said it reinforced their desire to host an event that everyone could enjoy no matter their gender, sexual orientation, age or race.

“It was like a step toward making the community as a whole more inclusive…,” Lexi said. She added that last year’s event could potentially generate more Pride month events hosted by local businesses.

Washington, they believe, is trending toward becoming more inclusive and accepting of the LGBTQ community. They agreed that there is a larger gay population than people may realize or know.

However, she added that LGBTQ pride is becoming better received in the Washington area. One of the ways they see this exemplified is at their drag shows on the last Tuesday of the month. The shows consist of four performers doing two sets each in addition to interacting with the crowd. The Gurkins shared that when their regular customers started attending the performances they would sit on the back patio. As more performances were held, they would inch their way to seats inside the bar. Today, those customers sit at the front and enjoy the performances.  Also, Mandy’s father attends the shows on Tuesday nights. She said he has a great time and thinks they are fun.

The Gurkins are slowly introducing more Pride events at Market Street Pub. They said they keep in mind that Washington’s population has its boundaries in relation to such events. They have received backlash from hosting drag shows, but it hasn’t been nearly the amount Lexi thought it would have been.

“This is still a really new thing for Washington. We don’t want to scare anybody off,” Lexi said. She continued to say that shows at the pub are often the one of the first drag shows (if not the first) that local people attend. She said most people love it and are excited to return to the next show.

The drag performances at the pub include a diverse variety of styles – from drag queens to drag kings to transgender drag performers to drag people who live with disabilities. They said they have between 25-30 participants who perform at Market Street Pub.

The Gurkins said they would like to make clear that Market Street Pub will not be made into a gay bar, but rather an inclusive one. They want it to be a place where everyone feels like they “belong” and are “comfortable” there.

The Mulberry House will also have a Pride Month event on Thursday, June 30 from 6 p.m. to 10 p.m. They will serve Pride themed drinks and food. Pride themed outfits are encouraged and the best outfits will win gift certificates to the restaurant. There is a $10 cover charge.