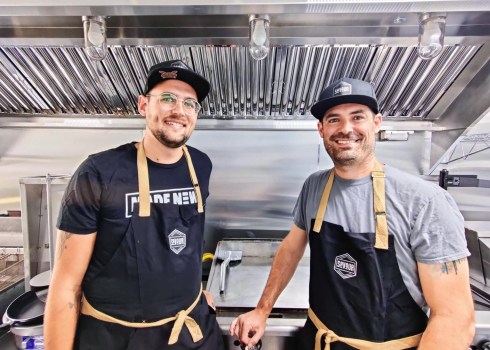 Skiba (left) and Jones dish up foods from their collective memories of living in and traveling across the Caribbean. Submitted photo. 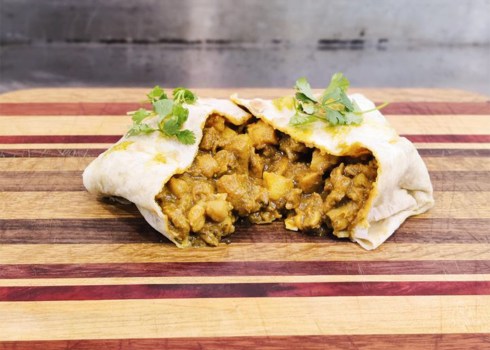 Savour's chicken roti. It has chicken, potatoes and chickpeas in a roti wrap. A roti wrap is similar to a flatbread. Photo used with permission.

Scents of all spice, thyme, curry, cilantro, habanero pepper, green onion, nutmeg and more  invoke memories of life in the Caribbean for chefs Kendall Jones and Andrew Skiba. They’ve taken those memories, made them tangible and will serve them to customers at their new eatery, Savour when it opens.

Their collective memories have come to life through their recipes for Caribbean delicacies. Jones and Skiba released their menu earlier this month.

“Washington has a great food scene but it’s definitely not represented here so we want to bring it,” Jones said in talking about bringing Caribbean dishes to Washington.

Chicken roti, jerk chicken flatbread with pineapple slaw and falafel are a few items on the menu. Roti, originally an Indian dish, migrated with Indian immigrants to Trinidad in the mid-1800’s. Almost 180 years later, the dish has traveled across the Caribbean and become a staple. Tucked into a traditional roti wrap (thin flatbread) is curried chicken, potatoes and chickpeas.

Jones explained that when customers look at the ingredients in their recipes, the menu items do not look and sound so foreign. For example, the jerk chicken plate has spiced chicken on jasmine or coconut rice, beets, pineapple slaw, jerk sauce and tostones. Tostones are similar to fried plantains, which is a fruit like a banana. Tostones and tacos add a latin flair to their menu. Jerk sauce is sweet, salty, spicy and loaded with flavor. Jerk sauce is authentically Jamaican.

Skiba said St. Croix is a “melting pot” for a lot of southern Caribbean cultures. He got a taste of the cultures when people would serve food at their homes.

Jones and Skiba say they love how food brings people together. Their goal with Savour is to create a space where people of all backgrounds and cultures can gather to share a meal together.

Savour is a mobile food unit. It’s not quite a food truck, because it cannot be driven.  Jones and Skiba are collaborating with Pitt Street Brewing Company On the Pamlico (307 W Main Street). Their mobile food unit is located there, but they are also pairing brews from Pitt with their menu items so customers can know the best flavor combinations.