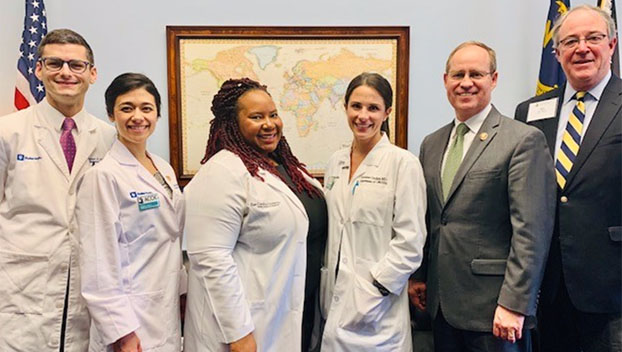 Senator Greg Murphy (second from the right) with members of the North Carolina OB/GYN Society. Photo used with permission.

The U.S. Supreme Court overturned Roe v. Wade giving state’s the authority to either restrict or ban abortions. The vote was announced on Friday, June 24.

Alito wrote an opinion reflecting the views of the majority of Supreme Court Justices. He used two cases – Roe v. Wade and Planned Parenthood of Southeastern Pennsylvania v. Casey to explain why, in the judges’ view, both cases do not answer if abortion is a constitutional right.

“The Constitution makes no reference to abortion, and no such right is implicitly protected by any constitutional provision, including the one on which the defenders of Roe and Casey now chiefly rely—the Due Process Clause of the Fourteenth Amendment. That provision has been held to guarantee some rights that are not mentioned in the Constitution, but any such right must be ‘deeply rooted in this Nation’s history and tradition’ and ‘implicit in the concept of ordered liberty.’ The right to abortion does not fall within this category,” Alito wrote.

“Today is a momentous day for the pro-life movement. The Supreme Court, basing their decision on the 14th Amendment, has ruled that, ‘the Constitution does not confer a right to abortion,’” Murphy wrote quoting Alito . “Roe v. Wade was errantly constructed, both as an assault on the unalienable right to life, as well as a gross violation of the 14th Amendment – overriding states’ rights in the name of federal overreach. The Supreme Court’s ruling is constitutionally valid, as the decision on abortion will now rightfully be returned to the American people and their elected representatives.”

Laura Strabley, executive director of the Coastal Pregnancy Center in Washington, emailed a comment to the newspaper about the overturning of Roe v. Wade. “My personal prayer for our community is that we will continue to find ways to stand together on common ground for the good of helping people.”

“Coastal Pregnancy Center (CPC) has supported families in our community in achieving a positive pregnancy outcome since 1985 and will continue to do so regardless of changes in federal or state law,” she wrote, “CPC provides medically accurate options education and life alternative support as a non-profit/Christian organization. CPC does not refer for abortion and is committed to offering a safe (pressure-free/non-judgmental) space where women are empowered to make an informed decision. Our team strives to serve with compassion and excellence.”