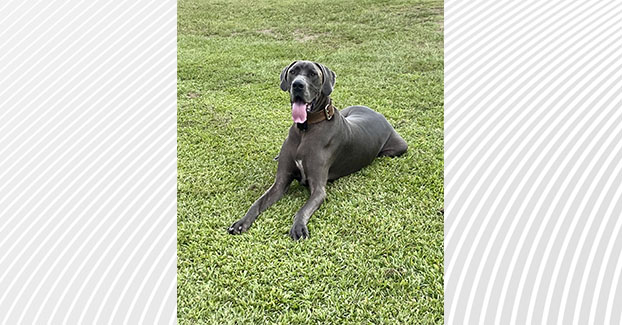 Lincoln is a two-year-old, Great Dane with satin nickel colored hair and a white spot on his chest. He weighs 200lbs still gaining weight until he reaches maturity at three years old. Photo by Holly Morgan. 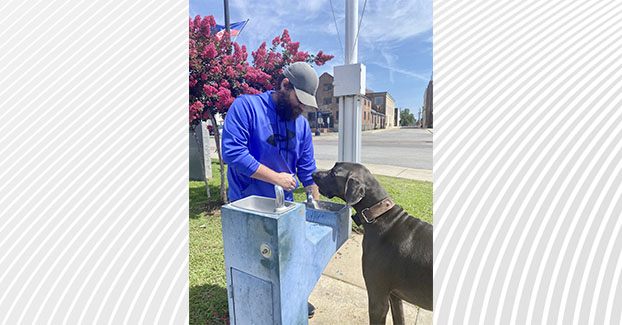 Rivenbark and Lincoln stop at the water fountain. Rivenbark shields the spout from Lincoln’s tongue. Photo by Holly Morgan. 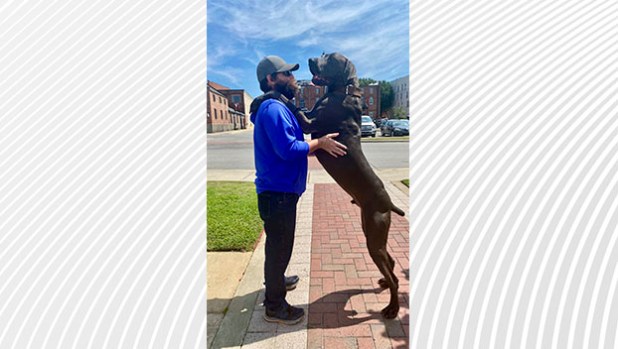 Chris Rivenbark and Lincoln facing each other. Lincoln stands over six feet. Photo by Holly Morgan.

Rivenbark commanding Lincoln to cross the street to join him. Photo by Holly Morgan. 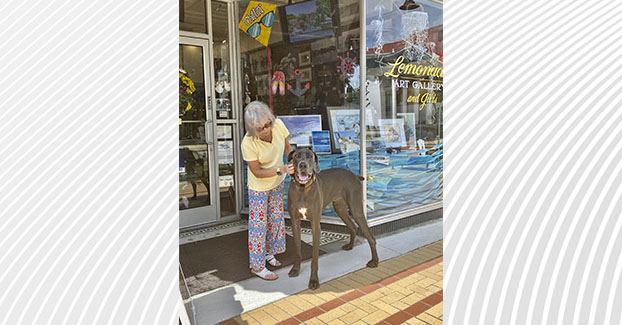 Lincoln likes to stop in the Lemonade Art Gallery to see his Schnauzer girlfriend, Lola. Sadly, he was too early to see her, but got several dog biscuits instead.

The minute Chris Rivenbark and his Great Dane, Lincoln, arrive at the waterfront for daily exercise and play, they are met with a flurry of the usual questions – “Can you train my dog to be like Lincoln,” or “can you train my husband and kids?”

Rivenbark, of Washington, trained two-year-old Lincoln, on his own. He did not attend formal dog training classes. He didn’t have a mentor or guide helping him. Lincoln is a mannerly dog because he respects and trusts his owner’s voice. He listens intently and obeys immediately.

Rivenbark uses voice commands and hand signals to guide Lincoln, eliminating a need for a leash. At the waterfront, there is a leash ordinance, but not a leash law; therefore, Rivenbark and Lincoln are not mandated to use a leash. Rivenbark has a shock device on Lincoln’s collar in case he loses control of his dog which has never happened. Even when other dogs approach Lincoln, he remains calm, cool and collected listening to Rivenbark’s commands to “stop” “sit” or “lay down.”

Rivenbark uses a technique he calls “come under” where Lincoln will walk to his owner and under his hand when he is called. This is helpful when crossing streets in downtown Washington. Rivenbark tells Lincoln to sit while he crosses the street. On the other side, Rivenbark will snap his fingers, stretch out his hand and command Lincoln to join him. Lincoln waits patiently for his owner’s command no matter the distance Rivenbark walks ahead.

Rivenbark began training and socializing Lincoln after the pup was vaccinated. Then, they could go out to places like the waterfront to train and play. He says the earlier you can train your pup, the easier it will be, because if you wait until they are six months or older, Rivenbark says you’ll have six months of bad habits to break.

The pillars of training a dog are; consistency, discipline and love. Reinforcing the lessons a dog learns at obedience training is crucial to creating a fun and safe environment for your dog and other dogs. Without dedicating time to teaching a dog proper manners, trying to get them to be as mannerly as Lincoln is futile. Rivenbark said treats can work in the beginning as positive reinforcement but as time progresses they become less necessary because dogs just see treats as food. Rivenbark said using kibble is an alternative he uses as a treat. Lincoln likes dog biscuits, cheese puffs and Goldfish crackers, Rivenbark shared.

A common question bystanders ask Rivenbark is how much Lincoln eats. Rivenbark said Lincoln eats 40lbs of dog food per week and weighs 200lbs. Great Danes reach maturity when they are three years old. Lincoln may not grow any taller, but he will gain more weight.

It’s important to keep a large dog’s weight in check, because it can affect their hips. Rivenbark said large dogs’ hips are usually the first health issue they have. Keeping a large dog active, exercising and an average weight can delay that health issue. On average, Great Danes live between seven and ten years.

Rivenbark said he and Lincoln could spend an hour at the waterfront and half of that time would be spent talking to people and graciously letting them pet Lincoln. Lincoln is a gentleman just like the U.S. President he was named after. He doesn’t mind being petted and will bump your hand requesting a pet.

At this time, Rivenbark does not train dogs, husbands or children. He simply enjoys spending time with Lincoln and chatting to bystanders at the waterfront.