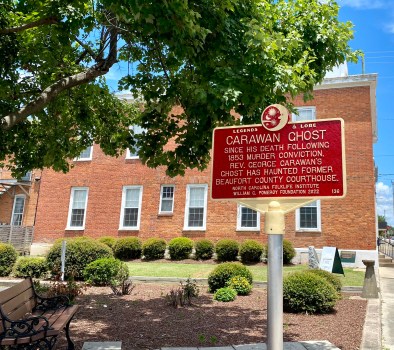 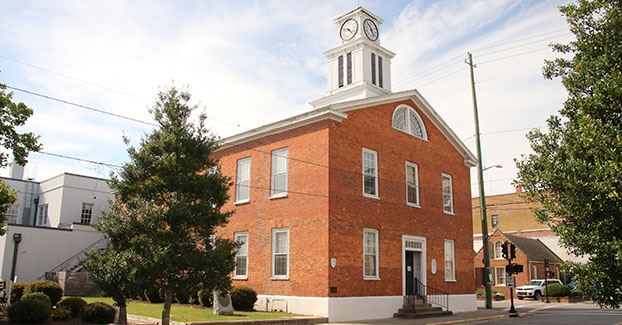 BMH Library was at one time the Beaufort County Courthouse where Carawan's infamous murder trial and death occurred in 1853. The library is located at 158 N Market St., Washington. Photo by Holly Morgan.

The second of three markers featuring a local legend will be unveiled this Saturday (July 2) at 8 p.m. at the BHM Library which is the former Beaufort County Courthouse. It will feature Reverend George W. Carawan’s infamous murder trial, death and haunting of the library.

The marker was made possible by a grant from the William G. Pomeroy Foundation. Similar to state historical markers, the foundation’s markers feature local legends and folklore. These markers, according to the foundation, are meant to promote cultural tourism.

Last summer, a committee was formed by previous City of Washington councilwoman Virginia Finnerty. Tasked with determining what steps to take to create a folklore trail in Washington Leesa Jones (Washington Waterfront Underground Museum), Berekia Divanga (grants assistant with the City of Washington) and Terry Rollins (Youth Services librarian, George H. & Laura E. Brown Library) earned grants from the Pomeroy Foundation to add three markers to the city. The first features the naming of Jack’s Creek. It was dedicated during this year’s Juneteenth celebrations. It is located on East Main Street beyond the armory.  The second features Reverend George W. Carawan, but information about the third marker has yet to be announced.

“[Folklore and legends] connect a community together and can reflect particular customs and beliefs of a region,” Rollins said. “The Pomeroy Foundation is allowing us to share — through its Legends and Lore markers — some of the very unique folk stories that we have here in Washington and Beaufort County.  We hope that these markers, and the folklore trail that they create, will not only pique the curiosity of visitors, but also that of local residents, and prompt us to learn more about the folklore and legends of our community.”

Carawan was a charismatic Baptist preacher who lived on Goose Creek Island. After his first wife, Elizabeth, died he married his housekeeper – Mary Bell. He accused Clement H. Lassiter of being “too familiar” with Mary Bell, according to a report by Elizabeth L. Shuman at North Carolina State University. An encounter between Carawan and Lassiter occurred when Lassiter stopped Carawan from physically abusing Mary Bell.

“Following the altercation with Lassiter, Carawan reportedly talked freely among his neighbors, expressing his belief that Lassiter deserved to be shot as well as his belief that there was no way that both men could live in the same town. Following Carawan’s utterances against Lassiter, he was met with a lawsuit filed by Lassiter requesting the payment of $2,000 in response to what was labeled as ‘slander,’” Shuman wrote.

Lassiter was found dead along a road that passed Carawan’s home. Lassiter took a route passing Carawan’s house traveling toward a school at Lake Mattamuskeet, according to Shuman. Carawan was arrested for the murder of Lassiter. At his trial, on Nov. 30, 1853, Carawan took his own life instead of accepting his punishment of being hanged. Posthumously, Carawan was accused of murdering his first wife, according to Shuman.

Following the marker unveiling, Washington Haunts will offer historic ghost walks around downtown. The 90-minute walk takes guests through St. Peter’s Church cemetery, historic homes on Water Street and a presentation about the Legend of Blackbeard. Tickets for the 8 p.m. walk will be available starting at 7:30 p.m. on Saturday at Harding Square next to the Washington Visitor’s Center. Tickets are $20 per person, cash only. The general public is welcomed to attend the marker unveiling for free.