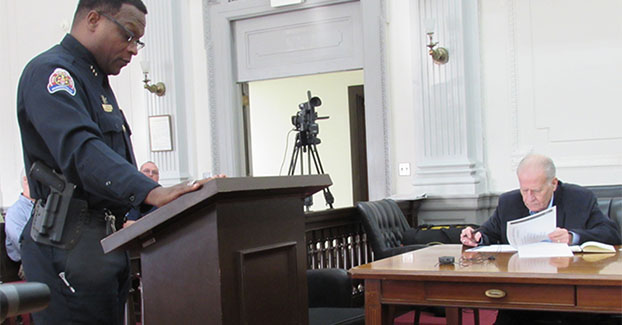 City of Washington Chief of Police Stacey Drakeford will remain working for city government; however, he is stepping down as chief. He is taking on a new role – Deputy City Manager and Director of Public Safety.

Drakeford served as the Directory of Public Safety for the past 10 years.

In his new role, he will continue to oversee police and fire services with the addition of overseeing Parks and Recreation and Brown Library operations, according to the City of Washington. Also, he will take on a new community outreach position that is funded by a grant from Building Integrated Communities. Meaning, he will implement outreach and diversity initiatives that make the city more inclusive to all residents and have more residents engaged with city activities.

“In the past, our community outreach has been ‘boots on the ground’ and getting out and performing and doing specific events in the community at-large,” Drakeford said.

Community outreach is important to Drakeford because “every citizen deserves to be represented,” he said. “It is imperative to me that we treat everyone fairly.”

City Manager Jonath Russell said the city and Drakeford conversed about how he could generate and execute community outreach ideas for the city. Drakeford’s new role “developed organically,” Russell said.

Russell said Drakeford will have an “active role” in selecting a new police chief. Also, he will mentor whomever is hired.

Drakeford, of Cheraw, South Carolina, served as the Director of Public Safety for the City of Clinton, South Carolina before moving to and working in Washington. He worked for the South Carolina Law Enforcement Division for 20 years and as a South Carolina State Trooper. He has a Bachelor of Science degree from Presbyterian College in Political Science and two Masters Degrees from Troy University in Criminal Justice and Public Administration. He attended the FBI National Academy and the Executive Fire Officer Institute.

To view the job listing for Chief of Police, visit: