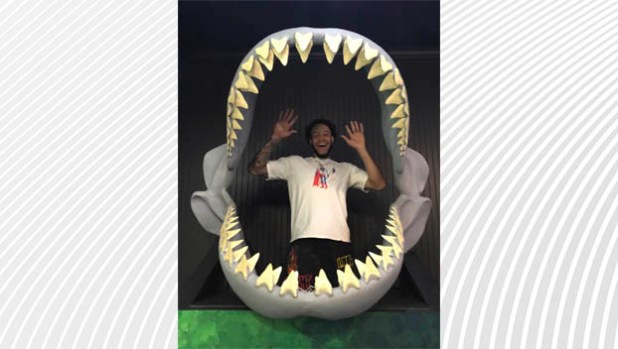 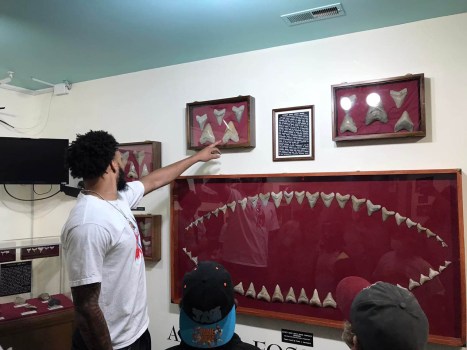 Campers led Amir and Richard Coffey through the main portion of the museum sharing facts about sharks and fossils. Submitted photo

Richard Coffey (left) and Amir spent an hour at the Aurora Fossil Museum. Part of that time included a speech from Coffey about perseverance. Photo used with permission

ImagineNC summer campers at the Aurora Fossil Museum were treated to a surprise visit by Richard and Amir Coffey on Friday, July 22.

Richard is a former Minnesota Timberwolves player, but his son Amir currently plays for the L.A. Clippers. Richard grew up in Aurora and still has family in the area. According to Cynthia Crane, museum director, Amir’s aunt Adele Coffey helped coordinate the Coffey’s surprise visit around the same time as a large family reunion.

As 26 middle school age campers listened to a presentation by Adele about famous people from Aurora, they saw a photo of Amir appear on a screen. Then, Amir and Richard emerged from another room in the museum and greeted campers. Crane said students kept looking at the screen and then at Amir in disbelief that he was in front of them.

“They will remember that for the rest of their lives,” Crane said.

Richard gave a motivational speech about persevering through failure and how a person’s response to failure may indicate how successful they can be.

The Coffeys spent an hour at the museum. Campers led them through the main museum sharing facts about sharks and fossils.

The Aurora Fossil Museum is located at 400 Main Street and open from 9:30 a.m. to 4 p.m. Tuesdays through Sundays. Founded in 1976, the museum is a 501(c)(3) nonprofit organization. The museum’s exhibits are free of charge.