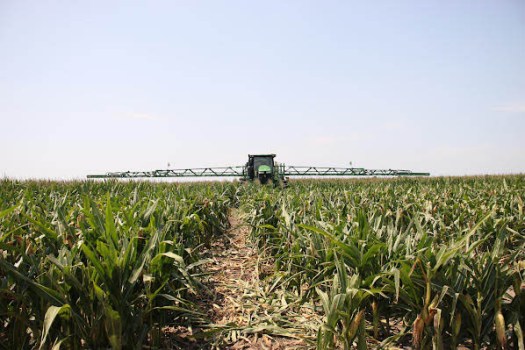 At this year’s Blackland Farm Managers Tour, local farmers learned how to profitably produce soybean and corn crops. Also, they learned how to prevent over fertilization and how to smoothly transfer the succession of a farm from one generation to another. Photo by Holly Morgan 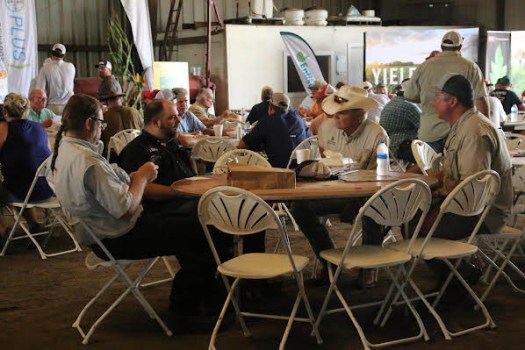 Troy Slager said the tour is like a reunion for local farmers and it offers a day of respite from work. Photo by Holly Morgan 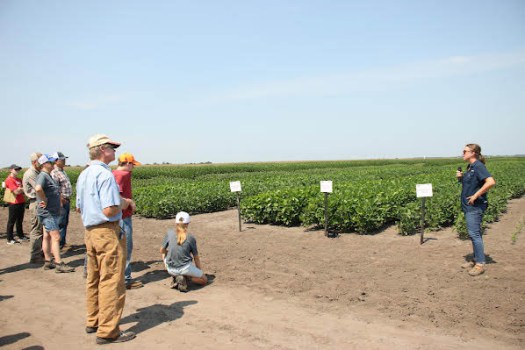 Dr. Rachel Vann (right) teaches farmers how to plant soybeans earlier in the year to produce a higher yield. Photo by Holly Morgan 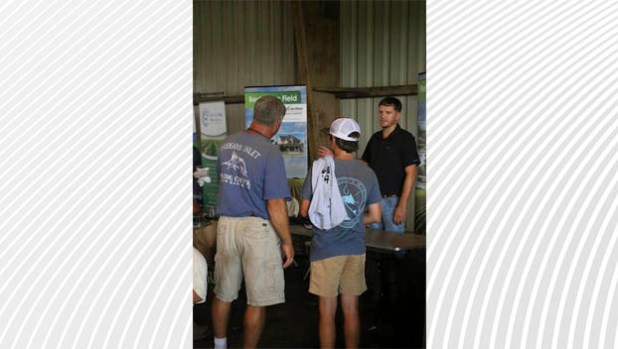 At the tour, farmers met many vendors and sponsors who provided information about their services or new products. Photo by Holly Morgan

Fifty-two years ago, farmers in four adjoining counties – Hyde, Tyrrell, Washington and Beaufort – formed the Blackland Farm Managers Association which later organized an event to teach other local farmers about how to harvest crops on black soil. With the same care and attention they show their crops, farmers have grown the event that now teaches over 500 guests the best farming practices for black soil as discovered through research at North Carolina State University. This event became known as the Blackland Farm Managers Tour Program.

The program was hosted on Wednesday, Aug. 3 at Southland Farms in Pantego by the Blackland Farm Managers Association and the NC Cooperative Extension.

Farmers learned about how to profitably produce soybean and corn crops and production practices that impact yields as well as planting maturity groups. Also, they learned practices that prevent over fertilization. Lastly, they learned from Jolene Brown (CSP, CPAE) who shared information on succession planning of a farm from one generation to another

According to Andrea Gibbs, agricultural agent with the Hyde County NC Cooperative Extension, farmers make up one percent of the total American population. She added that many American families do not have a connection to agriculture. She believes events like the farm managers tour would help the public and politicians understand practices used by farmers to be stewards of their farms and the land around them.

Gibbs shared that today there are fewer farmers who own and harvest large pieces of land.

Troy Slager, of Southland Farms in Pantego, is president of the board of directors for the Blackland Farm Managers Association. He also works with his father-in-law and brother-in-law as well as his wife who handles financial and administrative responsibilities at Southland. The farm has two locations – one in Hyde County and the other in Beaufort County. They rotate three crops; corn, cotton and soybeans. They farm 2,000 acres in Hyde County and 2,500 acres in Pantego. The farm has been in operation for the last 40 years. In the early 2000’s the farm expanded to Pantego.

Slager said the Farm Manager’s Tour is a “good gathering” for people to enjoy. It’s almost like a reunion for many guests. “A lot of farmers don’t take a whole lot of time so it’s kind of like a day off,” he said, adding that many guests like to share ideas on more efficient practices.

The tour program was named in recognition of the black soil often found in eastern North Carolina. It turns black due to large organic matter in the surface soil and poor natural drainage. A cause of black soil can be surface ponding of water for most of the year, according to J. Paul Lilly with the Department of Soil Science at North Carolina State University.