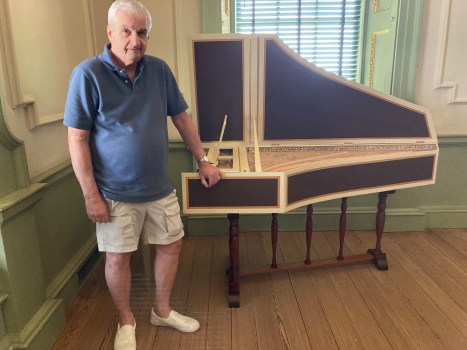 Ernest Miller stands next to the harpsichord he donated on July 22 to Tryon Palace in New Bern. It took five months for Miller to build the instrument. (Photo used with permission from Tryon Palace) 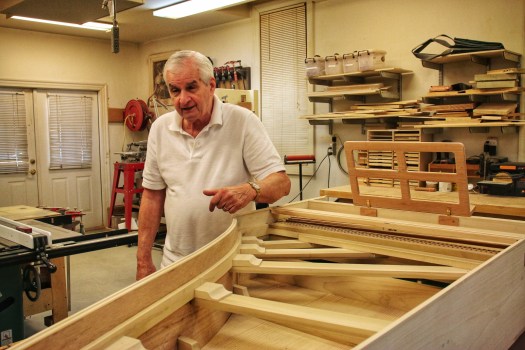 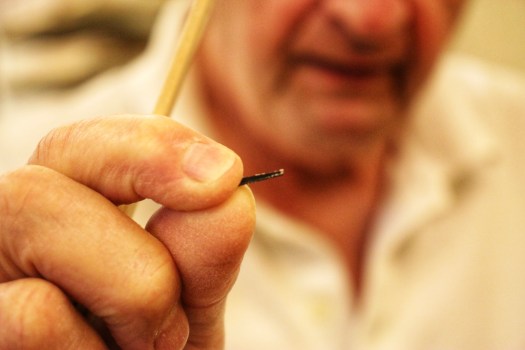 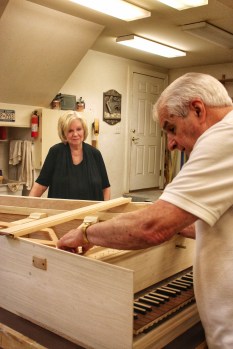 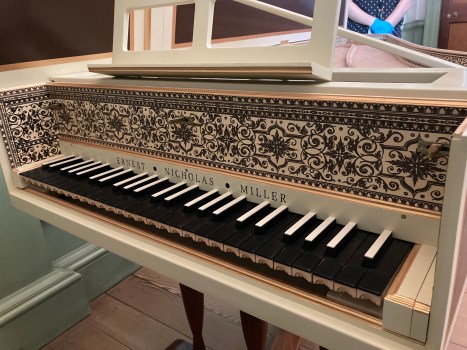 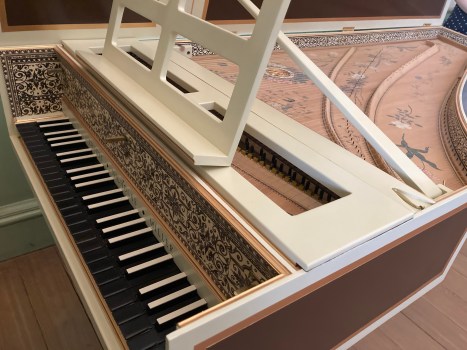 Ernest (Ernie) Miller and his wife Sandra Shulinoff Miller, of Chocowinity, donated a harpsichord to Tryon Palace in New Bern on Friday, July 22. It is a single manual harpsichord based on a 17th century design.

Miller’s harpsichord replaces one previously used by the historic site used during the Candlelight tours. For about ten years, Miller tuned and repaired the former harpsichord until it was no longer feasible.

The new harpsichord is six feet in length and 34 inches wide (with the top down) and has inverted black and white keys. It took Miller five months to complete. What makes it unique are the hand painted designs by Sandra in the interior case and an ornate pattern at the edge of the keyboard.

“I figured rather than going there and tearing my hair out everytime I go – let me give them a harpsichord that will work. I had one so I decided it was a good time to do it,” Miller said about a harpsichord he had already crafted. Miller will continue to tune and make repairs to the donated instrument.

Miller builds harpsichords and sells them through Harpsichord Clearinghouse in Rehoboth, Massachusetts who is one of the largest harpsichord dealers in the country. He also does commissioned pieces.

Miller is a retired choral music teacher who later became a piano technician. When he and Sandra (who is also a retired choral teacher) moved to North Carolina in the 1990’s, he decided to work exclusively on harpsichords after noticing a large number of pianos in the state.

What appeals to him in building harpsichords is the process of beginning with pieces of wood transforming them into a beautiful instrument. This is different from a piano, because pianos require a builder to have an actual instrument before they can rebuild a piano.

“There are some things you can’t duplicate in a one man shop in a house in Chocowinity…So you need something to start with. With a harpsichord all you need is a plan and wood,” Miller.

Since childhood, Miller has been interested in pianos. His family did not have the means to pay for a piano when he was a child; however, he went to a music and art high school in the Bronx borough of New York City where he discovered a greater interest in tuning and repairing pianos rather than playing. By that time, his family purchased an older piano for Miller.

“Rather than learning to play it, I started grabbing pairs of pliers and trying to tune for some reason. I was always sensitive to things being out of tune,” Miller said.

Years later, Miller tuned pianos at a music conservatory in New Jersey. The conservatory asked him to tune their harpsichord that was stored in a closet. “It was just magnificent,” Miller said. Miller befriended the builder of that harpsichord and became a student of his.

In the early 1980’s, Miller built his first harpsichord but deconstructed it when he learned it was not as professional as he once thought. A few years later, he built a two-manual instrument with assistance from his mentor Paul Kennedy (October 7, 1929 – July 21, 2018). Miller has built at least 40 harpsichords since.

“Hopefully when we’re not here anymore at least part of us will be there,” Miller said. “It’s nice to be able to do something for the community in general.”