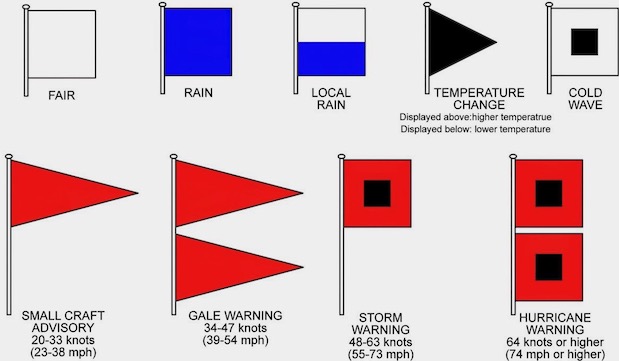 Over one hundred years ago, when coastal shipping was a primary method of moving goods to market, the Federal government realized that a system was needed to warn mariners of impending nasty weather. So, in 1898, President McKinley ordered the newly established Weather Bureau to set up a series of coastal warning display towers. The Bureau built towers at existing Weather Bureau stations in important coastal locations, like the U.S. Weather Bureau stations at Hatteras and Manteo. Towers were also constructed to “supply the needs of the more important ports not having regular Weather Bureau offices.” Those ports in North Carolina included Beaufort, Columbia, Edenton, Elizabeth City, Plymouth, New Bern, Southport, and Washington. Records indicate the Washington tower was in place by 1900.

The coastal warning display tower, or “storm warning tower,” was a unique skeletal tower designed to display warnings using flags during the day and colored lanterns at night. The individuals employed by the Weather Bureau to display the warnings, if not Weather Bureau employees, were given the title of “storm-warning display-man” and were often residents. In addition to maintaining the signals, display-men were expected to post warning notices in prominent places on the waterfront and, if necessary, personally notify the vessels in the port of any impending storm.

The first storm-warning display-man was Mary Gallagher, wife of town physician Dr. James Gallagher. It was in their backyard at 629 East Main Street, where the tower was erected. Mary Gallagher was listed in 1906 Weather Bureau records as the “display-man” and received $12/month compensation for her services. Dr. Gallagher died in 1911, and for over 30 years, the widow Mary Gallagher was responsible for raising the storm flags. At the age of 88, Mary was still listed in the 1940 census as employed by the Weather Bureau. Mary died in 1944 at the age of 91.

Washington’s historical 1900 weather signal tower is now standing next to the N.C. Estuarium. The tower is again displaying coastal warning flags. Many people are familiar with the hurricane warning flags, two square red flags each with a middle black square. Additional warning signals are:

Before daily weather radio broadcasts, the public would check local weather forecast flags to know what weather to expect for the day. This system of signal flags was established in 1887 before the advent of the radio. The Washington tower is recreating history by also displaying these flags. A white flag means fair weather, a blue flag means rain or snow, and a white over blue flag means “local rain,” what we know today as scattered showers

Ray Midgett is a Washington resident, local historian and the past president of the Historic Port of Washington Project.