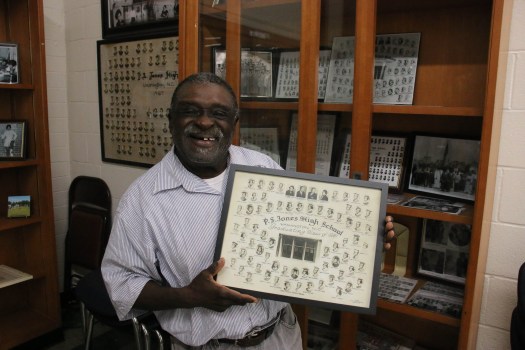 Anthony Northern stands in the P.S. Jones Alumni Museum holding a picture of his graduating class from 1961. Photo by Holly Morgan. 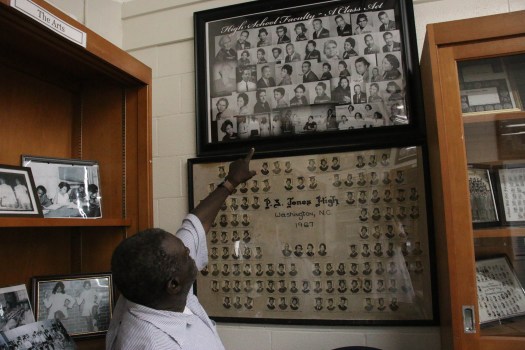 Anthony Northern (class of 1961) points to a collection of photos of teachers at P.S. Jones. He said teachers were good but also staunch disciplinarians. Photo by Holly Morgan. 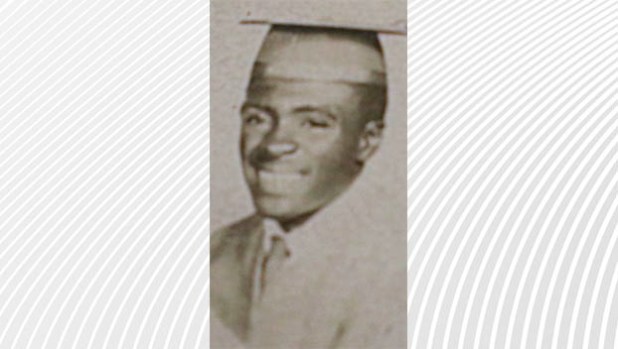 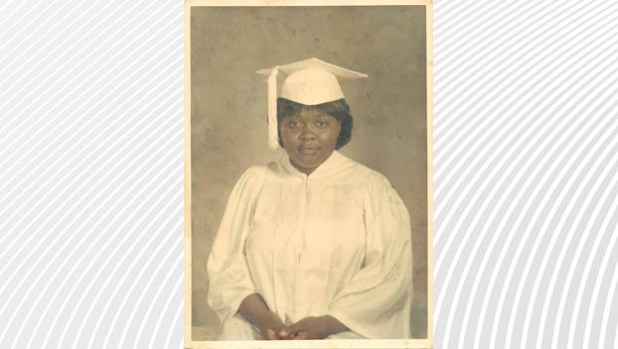 Antony Northern was a second grader at P.S. Jones school the same year his uncles returned froom serving in the U.S. military during World War in 1949.

When Northern was an elementary student, P.S. Jones students were displaced because of a fire at the school. Also, Washington Colored School became overcrowded and needed more space for students. It wasn’t until the sixth grade when Northern attended P.S. Jones campus near Bridge Street.

Northern remembered his math teachers. His favorite was Mr. Robert Teal who had successful students tutor struggling students on topics covered in class. How Teal disciplined students remains in Northern’s memory. If a student exhibited poor behavior like talking out of turn or chewing gum, Teal would say, “that will cost you 5,000” or “that will cost you 10,000.” Meaning a student would have to write “I will not talk out of turn during class” or “I will not chew gum” 5,000 or 10,000 times. The thing is, Northern said, Teal never checked to see if a student’s handwriting was consistent when they turned in their assigned punishment. This meant students could have their friends help them write.

“It really got our attention,” Northern said laughing. His seventh grade teacher, a Ms. Foxhall, was also a “staunch disciplinarian” he said. “They left a lasting impression on us.”

“They weren’t trying to scare us, but they wanted us to spend time getting an education,” Northern said. He added that teachers wanted students to confront and why it was imperative they earn an education.

After graduation, Northern went to Virginia to stay with an aunt and uncle and worked. He then returned home, but his father said he couldn’t stay. His father gave him $18 (or about $170 today). Northern boarded a Trailway bus and traveled to New York where he lived for 14 years. While there, he attended Washington-Irving and George Washington Educational Campus.

He became a lab technician for organic and inorganic colors. Later he worked at a chemical company that produced artificial colors for foods and sodas. Wanting a quiet life, Northern’s wife asked if they could move to Beaufort County. In 1975,  they built a home and furnished it; however, Northern wasn’t ready to leave New York – not for another two years. Finally, he made it back home and had a career at a paper mill in Plymouth.

Verna Cobb Shaw was a member of the first integrated graduating class at Washington High School in 1969. Had it been up to her, she would have finished her last year at P.S. Jones because she loved the school and she wanted to sit in the front section of the auditorium during assemblies with her classmates.

She attended P.S. Jones from the ninth grade to the eleventh. Like Northern, she loved attending P.S. Jones.

“I loved school,” Cobb said, “School was the place where I wanted to be because there were things to do.”

She was part of the library club and enjoyed typing and English classes as well as gym. Shaw said she wanted to be at school because there was a plethora of activities like softball and volleyball. She liked other classes such as biology, chemistry and home economics.

P.S. Jones had “the greatest” teachers, Shaw said. The greatest elementary teacher to Shaw was Ms. Alice Bailey who taught first grade. Mr. Wilkins who taught high school chemistry was another favorite of hers in addition to Mr. Randolph who was a tenth grade teacher.

“They meant business,” Shaw said about all teachers at P.S. Jones. “We had to work hard.”

“It was kind of hard in certain ways. It was hard for everybody,” Shaw said. Meaning, it was difficult for students to understand and adjust to each other.

Though there were no fights, as far as Shaw could remember, passive-aggressive, racially driven comments were common. One example still burns in Shaw’s memory.

“Fear gripped me so much. I didn’t say anything…I just walked away and went on out,” Shaw said.

Shaw also shared that white students were warned by their parents that if they interacted with black students then they would neither receive an allowance nor could they drive their cars.

Shaw recanted how she joined the softball team. The white team captain would not talk to her during the day but only on game day to remind Shaw that there was a game in the afternoon.

“There were some experiences there, but I made it through because I knew why I was at school – to learn,” Shaw said.

Overall, she is “grateful” for her time at Washington High School. “I’m glad I went,” she said.  “It’s a good experience for people to come together and pull together.”

After graduation, Shaw worked at Hamilton Beach before moving to New Jersey to be with her brother and sister-in-law. Eventually, she moved to Philadelphia and attended Temple University studying in the childcare program.