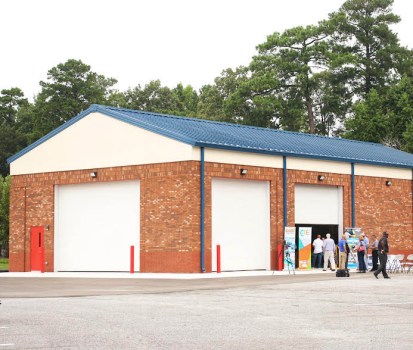 The new Boat Building Academy facility is 3,200 sq. ft., according to Jamie Stokes who is the director of maintenance for the school district. Stocks and Taylor Construction, Inc. built the new facility. Photo by Holly Morgan 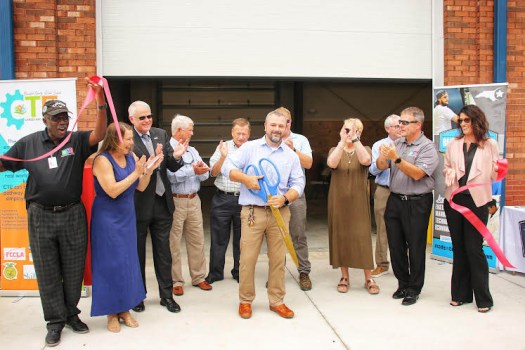 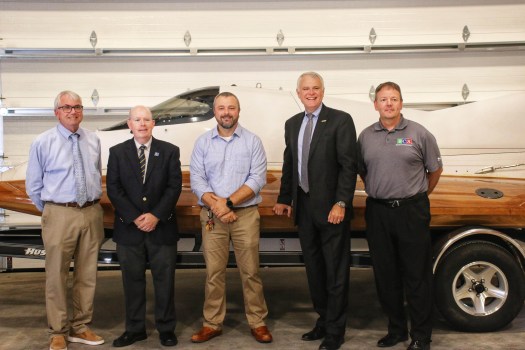 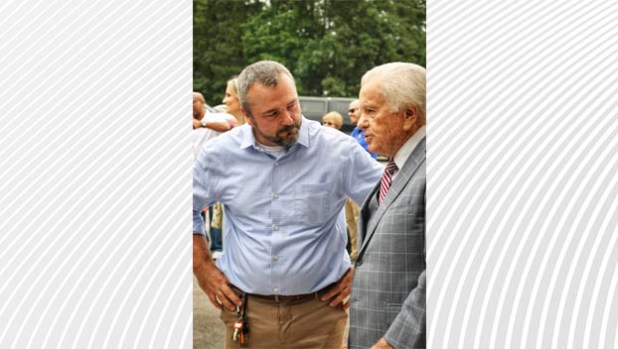 Ken Adams speaks with Reggie Fountain of Fountain Powerboats. Adams is a third generation boat builder with 35 years of experience. He will be teaching students in the boat building academy at Washington High School. Photo by Holly Morgan

This semester, about 25 Washington High School students in the boat building academy will be the first to use a new facility specifically designed for the class. Thanks to money supplied through a Gold Leaf grant, the facility as well as other projects for Beaufort County Schools have come to fruition.

Tuesday, Aug. 23, a ribbon cutting ceremony, hosted by the Washington-Beaufort County Chamber of Commerce, was held at the new facility on the high school’s campus.

According to Vicki Hamill, director of Career and Technical Education (CTE), Workforce, Innovation and STEM for Beaufort County Schools, boat building classes were held inside Washington High School which offered little space for tools and construction for two years.

Conversations about offering a boat building academy began around 2015, but seven years later (including a two year delay because of the COVID-19 pandemic) the facility was built.

“We’re really happy to have that brick and mortar space for our students, for our community, for our manufacturers,” Ken Adams said. Adams is the boat building instructor at Washington High School. His a third generation boat builder with 35 years of experience. He learned everything from his father. He worked in new product development at Fountain Powerboats, he shared.

“I think it’s a great thing that we’ll see huge dividends paid out for years to come, because this is going to give our students the opportunity to learn life skills, to learn how to work with tools, to learn how to build boats and skills that they will be able to take with them the rest of their life whether they are in that industry or not,” Director of Maintenance for Beaufort County Schools, Jamie Stokes said.

Should a student score a high enough grade in most CTE classes and do well in the class then they can earn credits toward a related program at Beaufort County Community College.

The program provides students with transferable skills so that if they decide to pursue another career they can use skills learned from the class like working with fiberglass, measuring and working with blueprints, Adams said.

A Golden LEAF grant not only helped pay for construction of the new facility and a special crane inside the facility, but also assisted in upgrading health science classes, welding labs, agriculture classrooms, a veterinary assisting lab and greenhouses at all three of the high schools, Hamill said.

Scott Hamilton, President of Golden LEAF, said the organization is “honored” to be a supporter of improvements to Beaufort County Schools. He said their recent projects is a “great example of what a good project” looks like. The boat building academy, he said, specifically outlines a “clear path to job creation.”

Per Golden LEAF, “In February 2019, the Golden LEAF Board of Directors awarded Beaufort County Schools $1,235,000 through the Community-Based Grants Initiative to expand career pathways at the three local high schools. This project is focusing on high demand employment opportunities in the area by establishing education to work pipelines in advanced manufacturing, healthcare, and agriculture. One of the programs is boat building.”

He added that getting a job can provide a person with hope, dignity and opportunity in addition to the feeling of being a contributing member of their community which aligns with Golden LEAF’s mission.