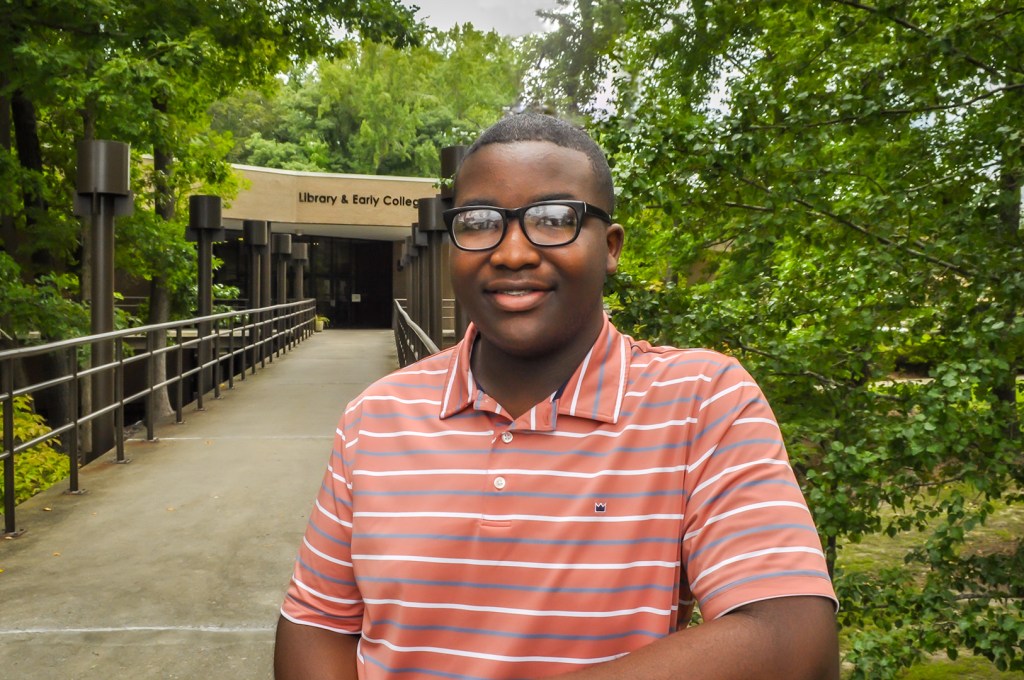 "Leadership let me know who I am as a person," says new SGA president Jaques Williams. (Beaufort County Community College)

WASHINGTON, N.C.— A reluctant leader, Jaques Williams has slowly stepped into larger and larger roles during his time at Beaufort County Community College through the encouragement of others. During each step along the way, he has grown more comfortable with the idea of leadership and has come to embrace the role of Student Government Association (SGA) president, calling the experience “a fairy tale”. The new opportunities through SGA have helped him to learn more about himself. Williams now sees himself as a “people person” and plans to earn an Associate in Science on his way to becoming an anesthesiologist.

Williams started at BCCC as a dual-enrolled student while at Washington High School. During his year at the college, former SGA president and fellow Washington HS student Katie Council encouraged him to get involved in student government. With further encouragement from Council and student engagement coordinator Anita Purser, he ran for president. He has passed that encouragement on, welcoming new people into the SGA.

“It grew on me. I realized it’s what I’m meant to be,” he says. “I’m not an athletic person. I’m not the most popular person. To me, leadership let me know who I am as a person.”
As SGA president, Williams sits on the BCCC Board of Trustees, and this position has already shaped his future commitment to community involvement. He hopes to serve on boards in the future, possibly the board of trustees for the college.

“Those people take time out of their day to come to meetings with the community college,” he says of the trustees. “One, that’s really important, and, two, it shows the dedication you have to your community. Being in a room with those individuals, I feel like it showed me giving your all for your community.”

“The people I have ran into or gotten to know, I have seen them involved in different things outside of the college,” he says. He lists off trustees such as Teresa Canady, Julia Lodge, and Wali Saleem. “That’s one thing to me that is really cool. I think I’m in the right spot.”

Getting involved on campus, he says, “not only gives you something to do, but it also strengthens the bonds you have here at the college. Before getting involved in SGA, I didn’t know anybody, truly. I only knew the people I went to high school with. Me finding my way on the SGA team, I got to know a lot of different people.”

Looking back on his experience in high school, he is proud of where he came from, but his new experiences at Beaufort have given him a platform for growth.

“I feel like I’ve reached my second level. I feel like there are levels to this thing called life. High school really paved the road, but being here at Beaufort put the lines on the road to really keep you going. Without the lines on the road, you’d be on the other side. I’m glad that I was able to come here and get that welcoming. Our motto here at Beaufort is ‘You Belong Here’, and, truly, I feel I really belong here. It was meant to be.”

His involvement through SGA inspired him to finish his degree at Beaufort before heading to university. “Before doing dual enrollment, I feel like I was against going to a community college first,” he says, “but after getting those credits, I was halfway done. I had one year left, so I thought I might as well stay, get involved, do different things.”

The college has been a laboratory of self-discovery for him. “This is also time for me to get to know myself more, because, truly, I didn’t know who I was as a person,” he says. “I’m finding that person. The opportunities, the getting to know new people, that really showed me what type of person that I am. Like I’m a people person. To me, I don’t know what I would do without people. It’s nice to get to know others, to know what their take on things is.”

While initially intimidated at a recent student leadership conference, he left feeling excited about the new group he met, and they have all kept in touch since. “We were all strangers going into it, we were all able to build a bond. I feel like that should be highlighted in life: building bonds with people you don’t know at all, because you never know what the outcome of it is.”

With multiple family members in the healthcare field, including his mother, sister, and aunt, Williams plans to continue his education at either North Carolina State University, the Universities of North Carolina at Charlotte or Chapel Hill, or East Carolina University in biomedical engineering or something comparable.

“I wanted to progress more,” he says. “I feel like I’m here to go forward, move forward. I thought about this idea of being a doctor.”
Next spring, as he departs for his next level of life, he will pass forward the encouragement to inspire the next leader at Beaufort, helping put the lines on the road for the next SGA president.