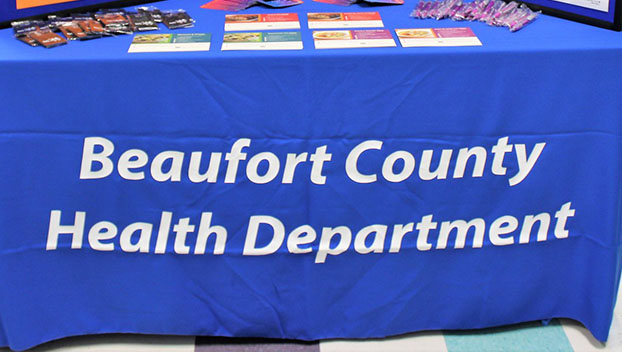 JaNell Octigan with the Beaufort County Public Health Department provided Beaufort County commissioners with information about the health of the county at their regular meeting on Tuesday, Sept. 6. The data she presented showed statistics from the last four years.

Octigan, MPH, is a preparedness coordinator and human services planner IV for the health department.

According to Octigan’s presentation, there are nearly 47,000 residents living in Beaufort County and of that population, 19% live in poverty which is four percent higher than the state. The median household income is $45,212 in the county compared to the state average of $54,602. When looking at race, 72% of residents are white, 25% are black, 7.8% are hispanic and 2.2% are other.

Beaufort County’s percent of people with a high school degree or higher matches the state rate at 87 percent. However, it is well below the state rate for people aged 25 and older who have a bachelor’s degree or higher. Over 20% of the county population has a bachelor’s degree compared to the state rate at over 31 percent. The county high school dropout rate has dropped from 3.2 dropouts per 100 students (from 2016-2020)  to 1.6. The current statewide average is 1.4 dropouts per 100 students from 2016 to 2020, all according to Octigan’s presentation.

Tobacco use among high school students in the county was 30.3% compared to 18.% of adults in the county who reported tobacco use. Octigan said the Beaufort County Public Health Department “is in constant communication with Beaufort County Schools regarding middle schoolers vaping e-cigarettes, tobacco use…” She added they are partnering to find the best ways to educate students about the health risks of smoking and vaping.

The five leading causes of death in Beaufort County, according to Octigan, are heart disease, cancer, cerebrovascular disease, chronic lower respiratory disease and Alzheimer’s. The top three quality of life issues for Beaufort County residents are low income/poverty (22.73%), substance abuse (16.32%) and lack of affordable housing (11.73%). This data came from a survey of 300 county residents. Data listed above this paragraph came from state government departments, per Octigan’s presentation.

To identify priority areas where the county health department should give attention and resources, it collaborated with 50 community leaders or organizations. Collectively, they agreed the top four areas should be chronic disease (education and prevention of cancer and Type 2 Diabetes and other medical conditions), mental health (which will include substance abuse prevention and recovery), local economy and vulnerable populations (minority as well as elderly and aging residents). Octigen said programs, education and outreach from the health department will focus on the priority areas for the next four years until another county health assessment is done.