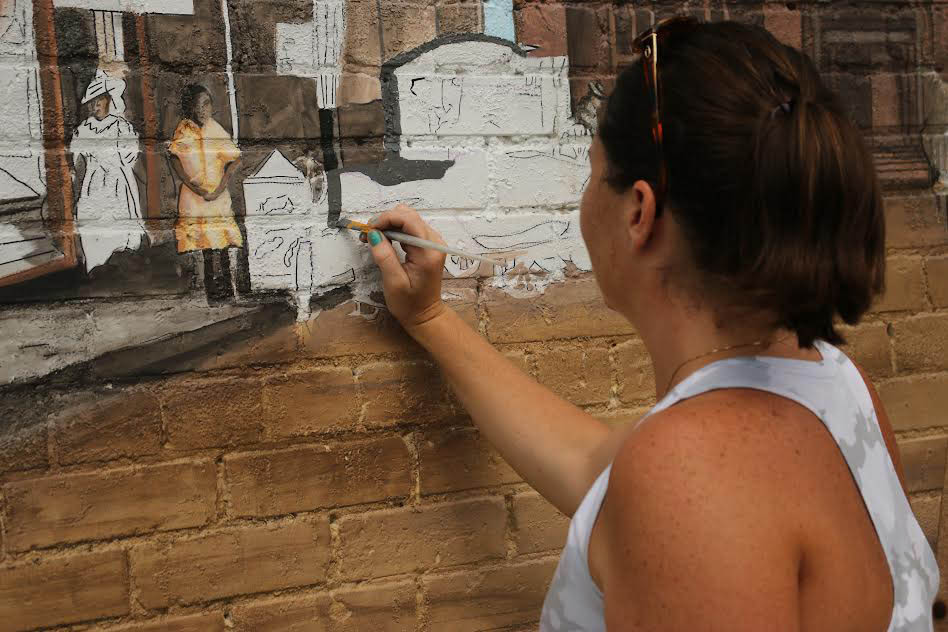 1 Local artist and Washington native, Samantha Brinson, paints a mural of Market Street featuring a scene of what Washington would have looked like at the turn of the century. Photo by Holly Morgan

Driving through downtown Washington, you may have noticed a green sheet hanging on the side of Lone Leaf Gallery and Custom Frames. That sheet is protecting a mural local artist Samantha Brinson is painting for Historic Port of Washington or HPOW.

When completed later this month, the mural will feature a scene of Washington from the early 20th century that shows what Market Street looked like if you face it looking down toward the water. The Washington Market (which has since been removed) is the crowning jewel of the mural. At the market, there were a variety of vendors selling items like fresh produce and fish.

Scott Sachs with HPOW said the mural is inspired by a photograph taken of Market Street at the turn of the century and used for postcards.

“Somebody can stand here and take a look at the past,” Sachs said.

This is not Brinson’s first painting downtown. She painted “Carolina” on an office to the left of Flash from the Past Antiques and signs for Val’s Bakery and Lone Leaf. The Market Street mural will feature a gold frame border to tie in Lone Leaf.

It’s taken her about two months, on and off, to paint the mural given weather, heat and other projects she is working on.

Painting the mural has been a “fun” project for Brinson who is a Washington native.

“You don’t know how many ‘thank yous’ I’ve gotten,” Brinson said. Older residents who have lived in the area for many years will stop her to share memories of Market Street when the Washington Market still existed.

“Every day somebody has a new story, and it’s really cool,” she added.

Brinson can usually be found painting in the early morning hours. HPOW wants to keep the mural under wraps as much as they can until they have a reveal toward the end of the month.

In addition to the mural of Market Street, HPOW is working to restore ghost signs throughout Washington. Ghost signs are historic, advertising signs – generally on the exterior of buildings – that have faded over the years.