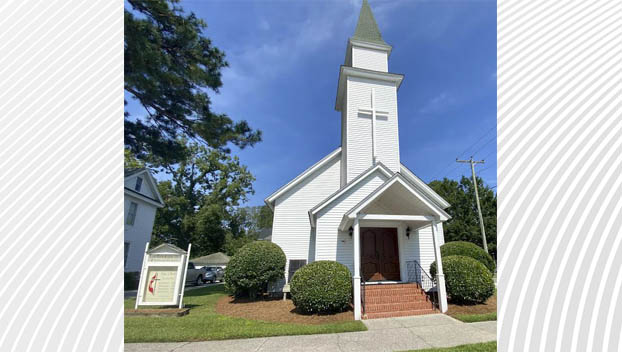 Trinity UMC is located at 491 E Main Street in Belhaven. It voted on Aug. 30 to leave the United Methodist Church and join the Global Methodist Church. For the congregation, the vote to disaffiliate was not about homosexuality, but rather, the authority of Scripture.

As of January 1, 2023 Trinity United Methodist Church will no longer be united with its national affiliation. Instead, they will join the newly formed Global Methodist Church.

They are waiting for approval of their disaffiliation from the Annual Conference which is expected to meet on November 19.

The United Methodist Church wrote a provision for churches in its fold who do not share similar beliefs to the denomination. The provision allowed churches to disaffiliate by the end of 2022. Many see Methodist churches’ disaffiliation as a stance on their beliefs on homosexuality. The denomination’s official stance on homosexuality is  that they do “not condone the practice of homosexuality and considers this practice incompatible with Christian teaching. We affirm that God’s grace is available to all. We will seek to live together in Christian community, welcoming, forgiving, and loving one another, as Christ has loved and accepted us.  We implore families and churches not to reject or condemn lesbian and gay members and friends. We commit ourselves to be in ministry for and with all persons.”

However, as much as 47% of church officials voted support the addition of gay membesrs of clergy and allow gay weddings to be performed by clergy.

Pastor Cris Noble and his congregation at Trinity UMC in Belhaven voted to disaffiliate on Aug. 30 then voted to join the Global Methodist Church on the same night. Noble said they “clapped and were very joyful” when the vote was taken. They made the vote after a year of conversations and educational events on how to go about the process and what it would mean for their church. Noble said Trinity’s vote was not about homosexuality; however, it was about maintaing a belief that the Bible should be read literally as the inerrant and infallible word of God.

“Either it’s God’s Word or it’s not God’s Word. I can’t have it both ways and say well I want to keep most of it but I am going to skip these portions,” Noble said. “I do believe that Scripture is inerrant and infallible.” Noble believe original Hebrew, Greek and Aramaic translations of the Bible are inerrant, but modern translations like King James Version and New International Versions are infallible. “That is to say what they teach is right and stands the test of time.”

Nearly 100% of the 51 members present and eligible to vote, voted for disaffiliation. Trinity has more than 170 members on its roster, but about 58 members attend regularly.

Noble said Methodists with similar views as him and Trinity UMC’s membership have been “accused of being anti-homosexual and that’s the furthest thing from the truth.”

At every church Noble has served at there have been homosexual members who were “actively involved in the church that were loved and knew they were loved.”

Noble has been a Methodist preacher for 32 years with over 12 of those spent at Trinity UMC.

Noble believes there is a modern thought permeating in a growing number of  Methodist Churches – that the Bible and the Book of Discipline are “malleable to current culture.”

“Discipline is clear in its language. We are not according to our current Discipline to ordain practicing homosexuals or really anybody practicing any kind of sexual perversion nor are we to do marriages of same-sex marriages,” Noble said.

Illustrating his opinion, he said people who do not strictly follow Scripture and the Book of Discipline are like people who take speed limit signs as suggestions rather than law.

He said it was “unfortunate” that there is not a governing body to hold people accountable to beliefs and practices appearing to be misaligned with biblical principles.

“I respect their choice to go that direction,” he said of Methodist leaders who affirm self avowed members of the LGBTQ+ community, “but I don’t respect them violating the vows that they took at ordination. At ordination, every United Methodist elder on up to the Bishop said they would uphold the Book of Discipline. So if you choose to not uphold the Book of Discipline you either change it through legitimate means or you move on. They chose to do neither.”

Noble shared he is not worried about receiving backlash from the Belhaven community for voting to disaffiliate. He has received some criticism from colleagues of other UMC churches throughout his career as a pastor. His confidence is in believing God has helped him, his family and his church family through happy and difficult times and a disaffiliation is no different.

“If others want to attack me or disparage me or whatever – let them go. It’s not going to bother me, because my God is on the throne,” Noble said.

Aside from Trinity UMC, First United Methodist Church leadership informed their congregation that they voted to petition the District Superintendent for their church to disaffiliate from the United Methodist Church. They voted 17 in support, six opposed and one abstention. The congregation of First UMC will need to take a vote on whether to disaffiliate. A two-thirds majority is needed for it to pass. A vote is planned for mid-October.