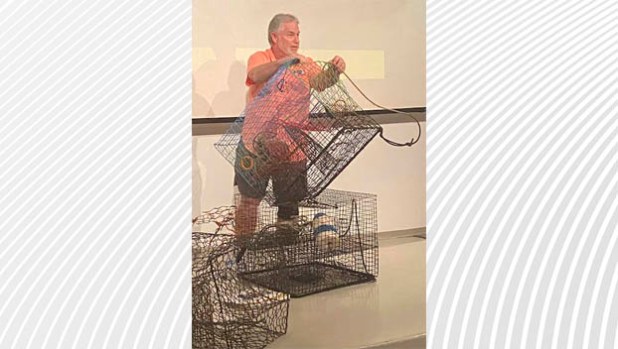 Alston Parker showing an audience how a crab pot functions. Made of chicken wire, a crab pot contains bait that lures crabs in and traps them. There is a hole for smaller or juvenile crabs to escape. Blue crabs at least five inches in width are considered fully grown. (Holly Morgan/Washington Daily News) 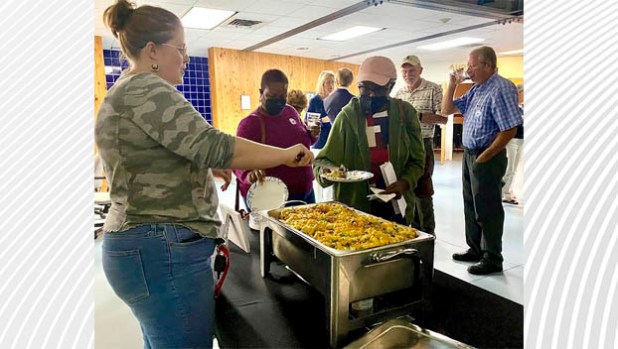 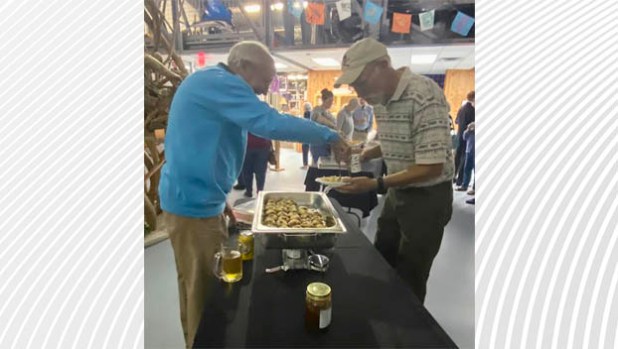 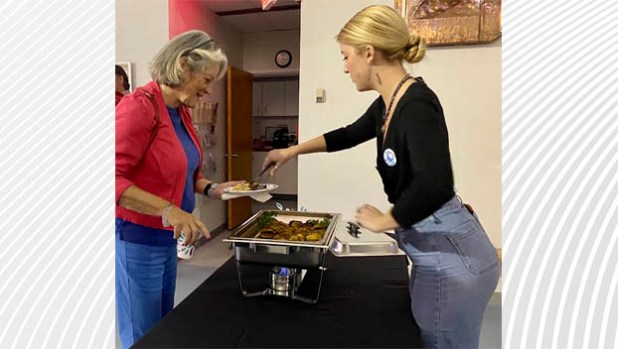 Don’t worry if you missed Wednesday night’s Estuary-Yum event, because the Estuarium is planning to host more in the future that could feature shrimp, scallops or another seafood species.

The Estuary-Yum event educates guests about various seafood species whose lifestyle is partially if not entirely spent in local estuaries. Then, guests are treated to food prepared by a local restaurant highlighting the species in their recipes.

Both Zapf and Parker discussed a declining blue crab population; however, they differed on why the population is decreasing. While Zapf largely believes overfishing is the cause, Parker believes it is water quality.

The North Carolina Department of Environmental Quality implemented blue crab season closures that will occur during the month of January then later during the first two weeks of March. The closures cover state waters north and east of the Highway 58 bridge in January, but will cover the southern and western portions of the Highway 58 bridge in March. The season closures were approved by the NC Marine Fisheries Commission as part of the Blue Crab Fishery Management Plan’ third amendment which was adopted in February of 2020.

“Season closures are necessary to reduce harvest because a recent North Carolina stock assessment for blue crab determined the stock is overfished and overfishing is occurring. Overfished means the population is too small. Overfishing means the removal rate is too high. North Carolina law mandates that fishery management plans include measures to end overfishing within two years of adoption and rebuild the stock to achieve sustainable harvest within 10 years of adoption,” according to the NC Department of Environmental Quality.

Per the North Carolina Department of Marine Fisheries, in 2016, 27.8 million pounds of crabs were harvested with a total value of $26.9 million. It sounds like a lot, but it is a decline from the 1990’s where upwards of 60 to 70 million pounds were harvested. Success in the 1990’s could be attributed to three hurricanes that hit the North Carolina  coast making it easier to catch crabs.

Fishermen, like Parker, are required to fill out information sheets detailing how much crab they caught. Their reporting has helped the Division of Marine Fisheries track a decline in blue crab populations.

Parker is not convinced that “accurate” reporting of how many crabs are being harvested from North Carolina coastal waters is the primary reason for a decline in population, he said on Wednesday night. In the last several years, he has seen a change in the blue crab population because of the water quality.

For blue crabs to survive, they have to have optimal water temperature, salinity and oxygen levels, according to the Division of Marine Fisheries. Things that can affect blue crabs’ mortality include large influxes of rainwater from rain storms or hurricanes. Also, toxins in the water can adversely affect blue crab populations. Toxins can either kill blue crab or their growth and reproductive process can be harmed.

At this time, season closures are an active effort to build up blue crab populations. Neither Zapf nor Parker discussed solutions to improving water quality.