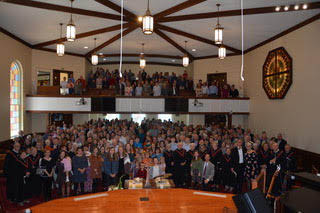 First Baptist Church in Washington began in 1822. Members celebrated the bicentennial anniversary on Sunday, Oct. 9 with a guest minister in addition to a history lesson of the church and music from bluegrass band King Mill Road and luncheon after the service. Photo provided by Dr. Greg Barmer. 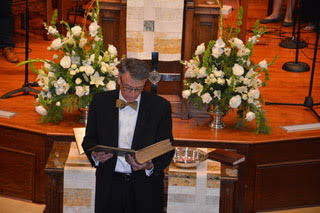 Barmer reads from an altar Bible that has been with First Baptist since the 1880’s. Photo provided by Barmer.

Last Sunday, Oct. 9, First Baptist Church in Washington celebrated its 200th anniversary. The theme for the day was “God’s faithfulness.”

The theme was chosen because God has sustained the church through two centuries and the congregation remains faithful to God, in part, by going into the mission field, Senior Pastor Dr. Greg Barmer explained to the Daily News.

When James Bonner founded the Washington settlement in the 1770’s, he designated an area for a building to be constructed where various denominations could meet to worship. Baptists met at that location until they decided to meet elsewhere in town. It wasn’t until 1916, before First Baptist Church of Washington (FBC) had a permanent place to worship at the intersection of Main and Harvey Streets. They established a church during World War 1, sustained the Great Depression, and World War II shortly after constructing their new sanctuary. Barmer said God’s faithfulness to the congregation helped them continue for another 106 years.

He continued to say congregants were “very intentional” about not celebrating themselves, but rather God’s faithfulness and the work God has completed through generations of congregants who have attended FBC. Congregants reflected on the hard work, sacrifice and faithfulness of previous generations.

The church has been collecting items for a time capsule which will include digitized 8mm film for future generations to view. Barmer said the children’s ministry was involved to tie in the future of the church with its past. The time capsule will be reburied around Thanksgiving this year. The time capsule was opened at the 175th anniversary. At that time, some of the older, fragile, historic items were removed from the time capsule so they can be preserved.

One way FBC has connected the past, present and future together is by showing casing a 105-year-old stained glass skylight that was previously covered. The discovery was made during recent renovations where a dropped ceiling from the 1960’s was removed. The dropped ceiling hid a dome in the sanctuary as well. The skylight was disassembled, cleaned, restored then reinstalled on a blank wall in the sanctuary where it can be backlit. The project was completed in time for the 200th anniversary, Barmer said.

A “real sincere desire to honor Christ and do what he asks us to do and not just what our preferences are” have led to a “healthy and strong” church, Barmer said.

Being obedient to Christ looks like going on mission trips in the eyes of FBC members.

Specifically, traveling to an African country called Eswatini (formerly Swaziland). It is bordered by Mozambique and South Africa. For the last 25 years, FBC has ministered to the Eswatini population by hosting tent revivals, sending money so that pastors in Eswatini can purchase food to serve their community, providing basic medical care and developing womens and childrens ministries. The church is starting a building project in February of 2023 where they will assist with starting construction of a sturdy church facility there, Barmer explained.

When asked what it means to him to be part of the church’s 200-year history, Barmer said FBC is a “continual blessing” to him, his family, congregants and guests. “We just celebrate and continue to pray for God’s presence and protection.”

Barmer hopes that for the next 200 years, future generations of FBC members will continue to be obedient to God’s commandments.