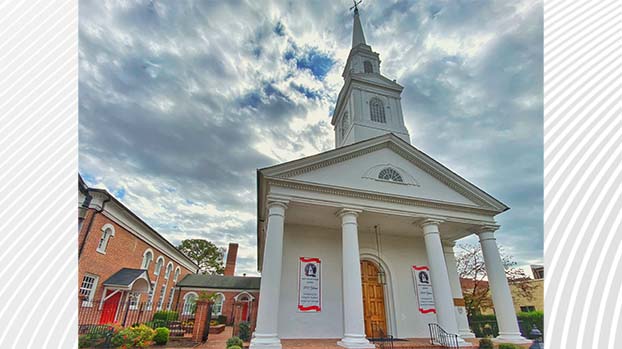 Dr. Lonnie Darnell stands in the sanctuary of First Presbyterian. The current sanctuary was constructed in 1867. The church office is located at 211 West Second Street. The sanctuary faces Gladden Street. Photo by Holly Morgan.

Interim Senior Pastor, Dr. Lonnie Darnell, explained the church is starting commemorative events a year in advance by having a related event each month. The purpose is to see how the community has changed over the years and to discuss how it could change in the future.

Bicentennial events began on Sunday, Sept. 18 with a presentation of banners that hang on the exterior of the church, special music and a luncheon after the worship service. The next event will be Saturday, Oct. 29 where Dr. Jerry Bron will give a seminar on the future of the Presbyterian denomination. The next day, Bron will give the sermon and there will be bagpipes. Nineteenth century dress is encouraged on Sunday, Oct. 30.

Bicentennial celebrations will culminate on Sunday, Aug. 13, 2023 with a luncheon.

Darnell has been with First Presbyterian since February of 2021. Prior to coming to Washington, he was a Presbyterian minister in Goldsboro. He has been a minister since 1988.

“Being an outsider so to speak, coming into a small community, I see that the people cherish their congregation and take pride in it. They are a faithful group the years…they are faithful to be a church for the community. They are very mindful of that…,” Darnell said.

Darnell said there isn’t a specific theme for the anniversary, but the church is reaffirming their core values which are worshiping God, loving their neighbors and serving the community.

Darnell said First Presbyterian recognizes that to remain relevant to their community, they have to remain willing to embrace all community members.

He shared that First Presbyterian’s mission projects include working with local nonprofit organizations in assisting with food and clothing distribution to those in need. In addition, First Presbyterian does mission work in Central America and Puerto Rico through the Presbyterian Disaster Assistance program.

When thinking about the next 200 years, Darnell said he hopes that First Presbyterian can remain relevant in the current culture rather than be reactive to what the culture is like at that time.

“I think as a congregation, we have to find ways instead of reacting to our culture, to adapt and to be able to be relevant to our culture instead of just reacting and saying ‘no’ and this and that. We’ve got to find ways to partner with the people of faith and people of non faith . We have to be partners in this world for us to even hope there’s going to even be another 200 years,” Darnell said.

First Presbyterian Church was organized on Aug. 9, 1823 in the Potts Chapel which was a former Methodist Church that was located on the eastern side of Market Street between Second and Third Streets. The graveyard was located between the Fire Station and Post Office, according to a document from George H. and Laura E. Brown Library archives.

A year later, Presbyterian congregants were ready to build their own place of worship. In 1865, Union Troops burned the sanctuary when they burned Washington as they evacuated the town, per the aforementioned document. The current sanctuary was built in 1871 then restored in 1954.