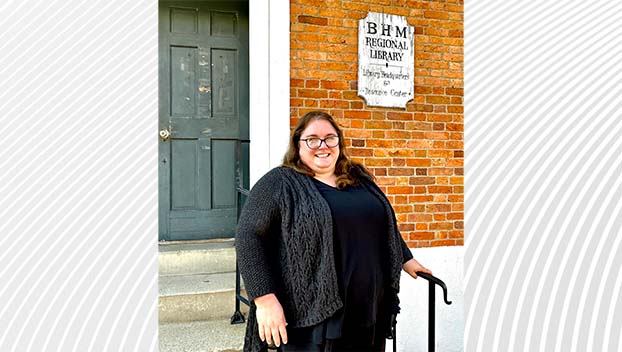 Karey Blanchard began working for BHM in February of this year. She says libraries are still important in 2022, because they offer opportunities to learn or develop skills. With new Chromebooks coming soon, BHM libraries will be able to offer computer courses. Photo by Holly Morgan.

Libraries are important elements to any town or city, because they can be a learning environment for all ages, says Karey Blanchard who became the BHM (Beaufort, Hyde, Martin) Regional Library Director in February.

“Literacy is one of the topics that really makes America and our counties very strong from infancy to adults who need to learn how to read,” Blanchard said.

Libraries also offer a chance to learn or develop new skills. Blanchard shared that two weeks ago, the library received a region-wide grant from the State Library of North Carolina. The grant will allow them to purchase new Chromebooks, offer computer classes and pay a part-time instructor to teach the classes. BHM is preparing to accept applications soon, Blanchard said. Participants who complete every session of a course get to keep the Chromebook. BHM will also receive new Chromebooks through the grant that will remain at the library. They will add digital literacy hotspots in areas where they previously would not have access.

Blanchard started her career in library services with BHM Library in Martin County at Martin Memorial as a library assistant. She has worked at Wayne County and Wilson County Public Libraries. She earned her Masters of Library Science from NC Central University.

She said working for BHM Regional has been a “great experience” since she began early this year.

A Day in the Life

Blanchard arrives before everyone else to start her day. She reads and responds to emails then contacts branch managers. Then she converses with local funders. When she has time, she likes to work at the front desk.

What she loves most about libraries is meeting new staff and guests.

“Libraries for me have always been very welcoming to me since I was very little,” Blanchard said. She said libraries can be a calming environment where people can bond over the joy of reading.

What does a librarian like to read? Blanchard prefers nonfiction and historical fiction. Specifically, she’s interested in World War II history and psychology She is currently reading “The Body Keeps the Score: Brain, Mind, and Body in the Healing of Trauma” by Bessel van der Kolk M.D.