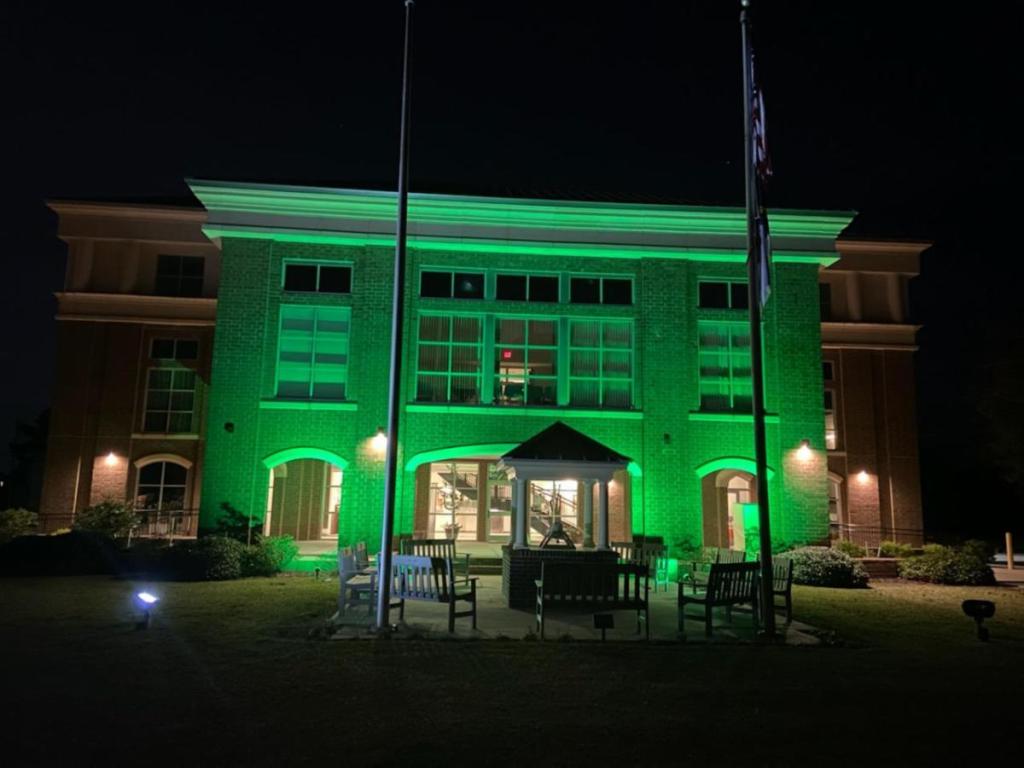 The Hyde County Government Center is illuminated green to show support for veterans and their families through Operation Green Light. Residents are encouraged to participate by simply changing one light bulb in their house to a green bulb. This can be an exterior light that neighbors and passersby see or an interior light that sparks a conversation with friends. By shining a green light, we are letting our veterans know that they are seen, appreciated, and supported. (Hyde County Government)

Friday, Nov. 11, we recognize Veterans Day, a national holiday honoring veterans of the armed forces and those killed in our nation’s wars.
Originally known as Armistice Day in observance of the ending of World War I, Nov. 11 became an official U.S. holiday in 1938 and was later named Veterans Day in 1954 to recognize those who served in all U.S. wars.

That Veterans Day falls just days after voters turned out in droves to participate in highly contentious midterm elections should not be lost.
While political division seems to dominate national discourse, Friday is an important reminder to appreciate those who have made the ultimate sacrifice to preserve our right to vote and speak freely about our government, however unsightly that process might sometimes become.

The cost remains high even for the veterans that make it home. Some come back with physical disabilities from combat injuries, many return with mental health challenges.

The suicide rate for North Carolina veterans is nearly one-and-a-half times higher than the overall suicide rate, according to to statistics from the U.S. Department of Veteran’s Affairs.

You can honor a veteran by volunteering, listening to their stories or simply telling them thank you.

Beaufort and Hyde Counties both passed resolutions in support of veterans and their families through Operation Green Light.
The Hyde County Government Center is now illuminated green as a result.

“By shining the green light, we’re expressing our profound gratitude for the sacrifices and contributions our veterans and their families made, on and off the battlefield,” said Sherry Nelson, Hyde County’s Veteran Services Officer. “At a time when our country is faced with so many issues, we can all agree that those individuals who risked and sacrificed their lives fighting to protect our country and our way of life deserve our support. I encourage everyone to join us in displaying a green light for our veterans and their families.”

Visit http://www.naco.org/operationgreenlight for more information and links to resources available to veterans.

The City of Washington will hold its annual Veterans Day Ceremony Friday, Nov. 11 at 11 a.m. in Veterans Park on 3rd Street.

Later that night, the United States Air Force Band will perform in concert at the Historic Turnage Theatre at 150 W. Main St. in Washington. The free concert is from 7-9 p.m. and will feature orchestral classics, marches, Broadway hits, jazz standards, movie music and patriotic favorites.
For more information, visit artsofthepamlico.org.