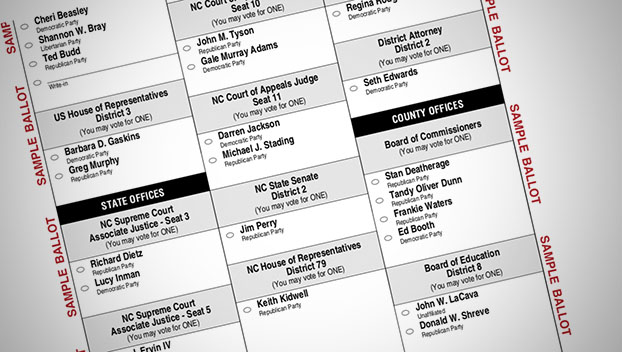 Editor’s Note: This story has been updated to include comments sent after press time.

Election night culminated on Tuesday, Nov. 8 when votes from Beaufort County residents were tallied to determine who would be the returning and/or new leaders of the county.

All results from Tuesday night remain unofficial until they are certified at a later date.

According to the North Carolina State Board of Elections there were 19,032 ballots cast out of a total 33,408 for a percentage amounting to 56.97.

Scott Hammonds defeated Corey Rogerson to become Beaufort County Sheriff. Hammonds won by more than 1,800 votes. He garnered 10,337 votes to Rogersons 8,469 for a difference of 9.94 percent.

Current Beaufort County Commissioners Ed Booth, Stan Deatherage and Frankie Waters will continue to serve on the board. Tandy Dunn was not elected.

Archie Griffin and James Allen were elected to be Beaufort Soil and Water Conservation District Supervisors.

Murphy’s office sent a press release with his comment which reads, “Tonight’s victory is a tremendous win for Eastern North Carolina. Our community has spoken, and delivered a strong repudiation of the Progressive Left’s and President Biden’s Socialist agenda. They have crippled our economy, weakened both our domestic and national security as well as devastated our children’s educational future. The election results were a resounding statement that North Carolina, especially eastern North Carolina, is ready to take back this nation and turn things around. I am so thankful for the Third District’s continued trust in me, and I look forward to delivering strong results for the American people in our new Republican majority.”

Murphy’s opponent, Barbara Gaskins, wrote to the Daily News that her team was “disappointed” with the results. “I am planning on running again in 2024, but in the meantime Murphy has been elected as the representative so he needs to better represent all of Eastern NC and not certain people or towns. As an advocate of the people I will continue to be a thorn in his side to ensure that he upholds the rights of everyone in this district regardless of who they are or how they voted. A true leader has to be nonpartisan so that they can adhere to the needs of everyone. Hopefully the people of Eastern NC will realize this as well.”

Sheriff-elect Scott Hammonds wrote, “I want to first thank the people of Beaufort County for putting their faith and trust in me to be their Sheriff.  Your vote of confidence, contributions, encouraging words of support and prayers will never be forgotten. I also want to thank my wife, Sarah, for standing by me during this long contest. I am blessed with great family support, many friends, and community supporters who have worked tirelessly over many months to make this night a success.  It has been a rewarding journey for all of us.”

Corey Rogerson, Hammonds’ opponent wrote, “I want to thank the citizens of Beaufort County for the last 15 months. We accomplished a lot of things throughout this campaign and hopefully brought some unity to this county along the way. We will see what the future holds and continue to pray for Beaufort County, the citizens and our Sheriff’s Office!”

Incumbent commissioners Booth, Waters and Deatherage shared their thoughts with the Daily News on their unofficial victories.

“This was a very negative campaign that did not work. I greatly appreciate the voters putting their stamp of approval on my job performance during the last eight years. Looking forward to serving the people of Beaufort County,” Waters wrote to the Daily News.

Deatherage wrote, “I am deeply humbled by the continuing growth of my constituent base of loyal supporters, who voted for our Conservative cause; moreover, I am unreservedly thankful for those core constituents, who worked diligently to further my message, our ambition, to save this part of our good Republic; to regain its strength to nurture of children, and in an ongoing sense their intended offspring here in Beaufort County. To that end, this growing group effort, of which I am also a constituent of that cause, I am proud to have added my unreserved digital skills and active space in aiding 5 local candidates in their 5 local victories,

“For that one accomplishment, in this Midterm election cycle, I was a participant in a group cause that must continue to save this Representative Republic ‘from all enemies, foreign and domestic.’ Yes, I am just a lowly Beaufort County Commissioner, but with all ‘politics remaining local,’ we must all seek out our participating role to Right this listing ship … especially if that role is one of a committed constituent.”

Williams wrote to the Daily News, “I am honored to have been re-elected and to serve District 4 on the Beaufort County School Board for another term. As promised when I was first elected, I will continue to serve with a common sense approach and to support the students, staff and families of Beaufort County. I am deeply grateful to the voters of Beaufort County with trusting me with this responsibility.”

Hickman wrote to the Daily News after press time. His comment read, “I’m looking forward to getting to work.  I want to thank the people of the 2nd School District for placing their confidence in me.  Representing their interests as well as all of Beaufort County is my primary concern.  Thanks also to Mrs. Peed for her years of service to Beaufort County.”

Shreve also wrote to the Daily News after press time. His comment read, “I would like to thank all those who believed in our campaign for the Beaufort County Board of Education Bath District 8 Seat and your vote of confidence. We met so many citizens who are concerned with the state of our local schools here and want a change in our Board of Education. We plan to work hard for the success of our students and our schools as promised!”