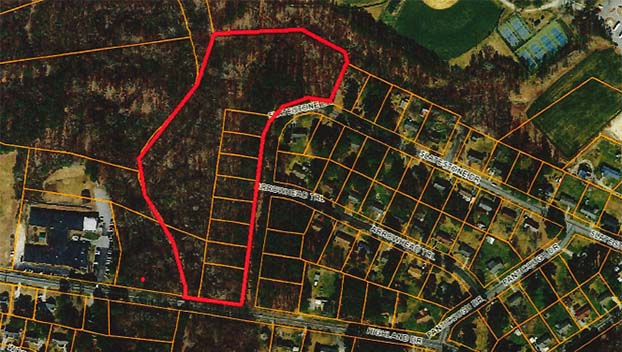 Council denies rezoning request for multi-family housing. The land is north of Highland Drive and west of the Slatestone Hills subdivision near Washington High School. The land is a total of 12.23 acres, but 10.53 would have been used for the complex. Photo of location map can be found on the City of Washington Planning Board's website.

Washington City Council voted 3-2 denying a proposal to rezone a portion of land that was planned to be the site of an apartment complex. The vote was taken at their regular meeting on Monday, Nov. 14. Council members William Pitt, Lou Hodges and Bobby Roberson voted to deny the rezoning request, but Mayor Pro-Tem Richard Brooks and Councilman Mike Renn voted to approve the request. Renn joined the meeting by phone.

The land is north of Highland Drive and west of the Slatestone Hills subdivision near Washington High School. The land is a total of 12.23 acres, but 10.53 would have been used for the complex. The land is currently zoned R9S which allows for single family residences. Mohammad Darar, owner of the property, and Marie Peeden with Inner Banks Engineering had hoped the land could be rezoned to Office and Institutional. This way, it could allow for high density development whereas the current zoning only allows for medium density development.

As of last night, Peeden said the plan was to add at least two, standard apartment buildings, but she was not sure if a third could be added. She was not sure how many apartments would be in each building. The complex would have had one entry and exit point on Highland Drive away from Slatestone Hills access points. She added the apartment complex would not have diminished surrounding property values.

Darar would like to build a standard apartment complex so that young people and families can have more job opportunities in Washington. In a phone conversation with the Daily News, Darar noted a challenge he faces as a business owner of Mulberry House which is helping potential employees find housing in the area. At the meeting on Monday night, Peeden gave a short presentation to council members about why the land should be rezoned. She explained that a “housing shortage” makes it difficult for young people who have moved away but would like to return and live in the area. Also, some potential residents are constrained by financial hurdles or homes for rent have been snatched up.

According to City Manager Jonathan Russell, Darar can reapply for rezoning; however, he will be allowed to apply for Residential Multi Family six months from now. This allows medium to high density development.

The motion on Monday night was to approve the property, because the planning board unanimously approved the request. In addition, while the request was not consistent with the Comprehensive Plan/CAMA Future Land Use Map – it was consistent with economic development goals and housing goals in the Comprehensive Plan, and the rezoning was  reasonable and in the public’s interest due to addressing a need for housing and job opportunities.

Council took an initial vote that was later clarified in the meeting after a five minute recess. Bobby Roberson made a motion to deny the rezoning request, because in his opinion it was not consistent with the CAMA future land use plan and map, it was unreasonable and not in the public’s interest, and the Office and Institutional zoning was not compatible with the surrounding area. Plus, in his mind, it could damage the character of Slatestone Hills.

Mayor Pro-Tem Brook was initially against the rezoning, until Peeden clarified that the complex would have had one entry and exit point away from Slatestone Hills.

“When you put something on [current residents] that haven’t been originally thought out and put on [current residents] you’re making one couple happy and you make another couple that’s already unhappy – we should be in the business of taking care of our citizens, making it fair and square for everyone,” he said before Peeden spoke. Mentioning his experience on the Board of Adjustments, he said one of the board’s rules was, “do not significantly change the area from what it is.” He said an apartment complex would change “the area from what it is and it shouldn’t be allowed by the rules and if we stick by the rules everybody will be satisfied.”