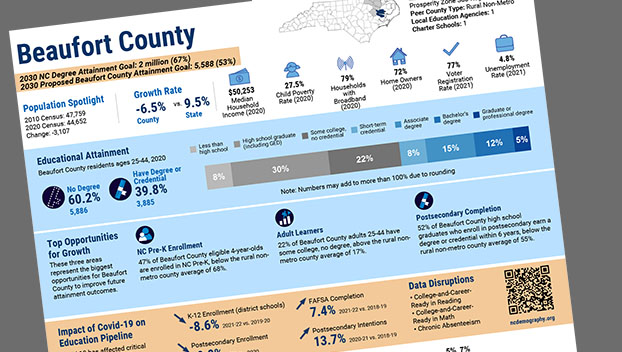 A profile of Beaufort County recently released by myFutureNC shows 39.8 percent of residents ages 25-44 hold a degree or credential. The nonprofit’s goal for the county is to reach 53 percent by 2030, according to the organization focused on education attainment across the state.

“Two of every three new jobs now require some form of post-secondary education – whether that’s training credentials, an associate degree, a four-year degree, or higher,” according to Andrea Smith, Bank of America CAO through myFutureNC. “This reality underscores how critical education is to career growth and how important it is to increasing economic mobility.”

The updated 2022 County Attainment Profiles were produced in partnership with Carolina Demography and released Nov. 9.

“North Carolina’s regions and counties are the true frontiers of the state’s educational attainment efforts,” according to the release. “In many communities across the state, good work is already underway to increase postsecondary attainment and alignment with workforce needs.”

Beaufort Count’s 47-percent enrollment of eligible 4-year-olds in NC Pre-K is below the rural non-metro county average of 68 percent.

Beaufort County’s population decreased 6.5 percent between the 2010 and 2020 Census, while the state population increased 9.5 percent across that span.

According to 2020-2021 data cited in the profile, Beaufort County has a median household income of $50,253, a child poverty rate of 27.5 percent, 79 percent households with broadband, 72 percent homeowners, 77 percent voter registration and an unemployment rate of 4.3 percent.

In Beaufort County’s “Prosperity Zone Sub-Region,” 86 percent of postsecondary degrees and credentials conferred by regional institutions are aligned with labor market needs, according to the profile. Top areas of misalignment are Health Science; Transportation, Distribution and Logistics; and Business Management and Administration.

The report also identifies “promising attainment practices,” such as the Beaufort Promise, a program covering tuition and fees for students at Beaufort County Community College through at least the Spring 2023 semester using a combination of existing and new federal and state programs.