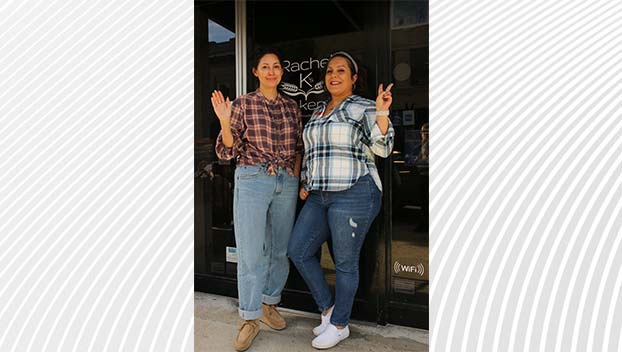 Amanda Garcia-Phelps and Anna Hromyak are the new owners of Washington Bakery. The new bakery will reside in the same building as Rachel K’s bakery. Rachel K’s officially closed on Nov. 12. Photo by Holly Morgan.

Phelps and Hromyak are aiming to open on Nov. 30 as Washington Bakery. Most of what patrons knew and loved about Rachel K’s will remain like the decor and some of the menu items.

“We don’t want to shock the community,”  Hromyak said.

Customers will continue to choose from their favorite Rachel K’s treats on the Washington Bakery menu, and the recipe for those items will remain the same. However, some items will be made in lesser quantities to make room for new items. Phelps said “heartier” selections will be added such as breakfast tacos and more soups.

They plan to infuse Greek recipes to honor Hromyak’s Greek heritage. Sandwiches, flatbreads and pasta dishes will appear on the expanded menu.

According to Washington Bakery’s social media pages, Jennifer Davis will be the head baker. She has years of experience working at Rachel K’s. Davis’ husband, Jaime, is executive chef at The Hackney. Phelps and Hromyak said they would like to keep current staff members and promote within the business. They held a job fair earlier this week to fill positions.

“We don’t want to do a big change right away,” Hromyak said, “over time we’re just going to go with our feedback and change from there.”

When thinking about taking ownership of a bakery that was often frequented by locals and vacationers as well as admired for its contribution to the community, Hromyak said she and Phelps would like to keep Rachel K’s owner, Rachel Jordan’s “legacy going.”

“We don’t want to switch everything. We want her to know we appreciate it and everything she’s done for the community and the staff and to keep that going,” Hromyak said.