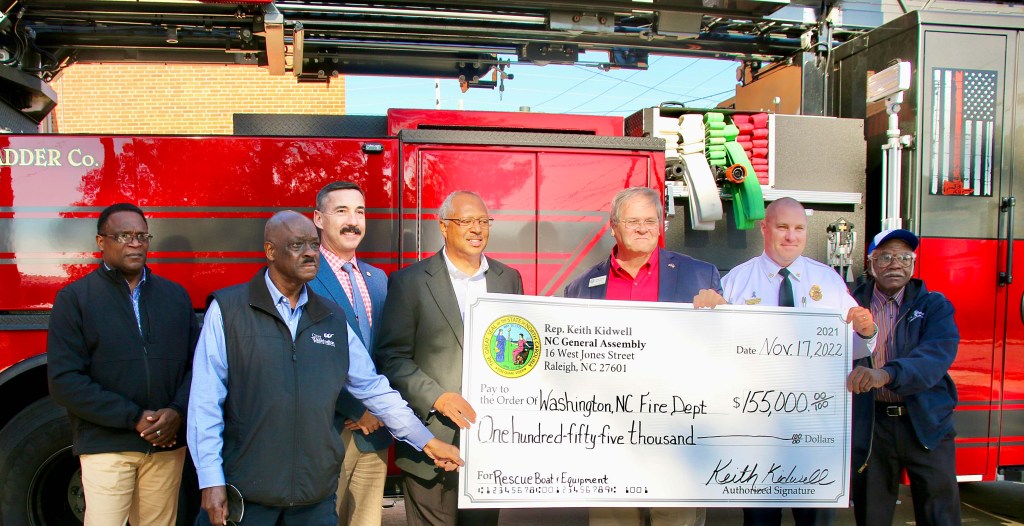 The City of Washington Fire Department received a check for $155,000 of state monies on Thursday, Nov. 17. The money will go toward upgrading an existing rescue boat and purchasing two inflatable Zodiac style boats. The inflatable boats will help rescue residents who live on interior streets and are stranded because of flooding.

“It’s going to be great knowing we don’t have to wait for help. We’ll be able to immediately deploy at any point and time we need to deploy,” Interim Fire Chief R.M. Flowers said.

“It’s a huge asset for us,” Flowers added.

Flowers said the department applied for federal grants for several years, but did not receive them. “Representative Kidwell was gracious and kind enough to put it into the state budget for us so we don’t have to rely on federal monies anymore.”

Representative Keith Kidwell helped secure funds from the state budget to purchase the Zodiac style boats and upgrades to the existing rescue boat. Kidwell thanked everyone at the fire department for their service to the City of Washington.

Flowers said the purchase of the inflatable boats and upgrades will be complete by spring or summer of 2023. The boats will be stored at Fire Station 1 on Market Street.