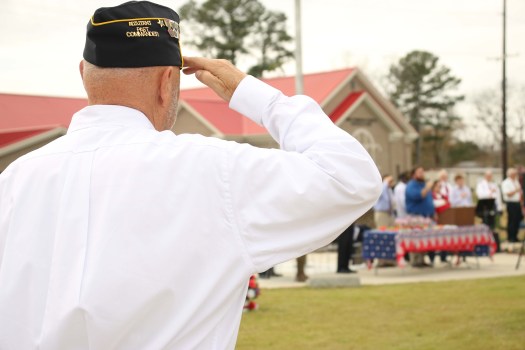 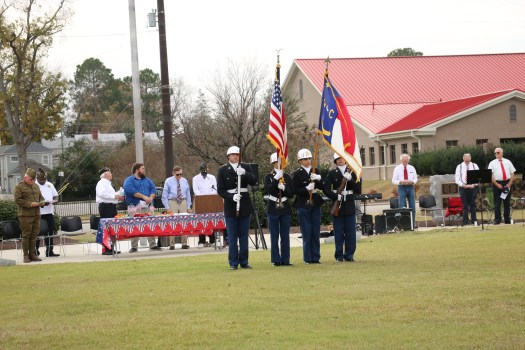 Washington High School JROTC presented the colors at the ceremony. Veterans Day and Pearl Harbor Day were remembered with a combined ceremony on Wednesday, Dec.7 at Veterans Park in Washington. (Holly Morgan/WDN). 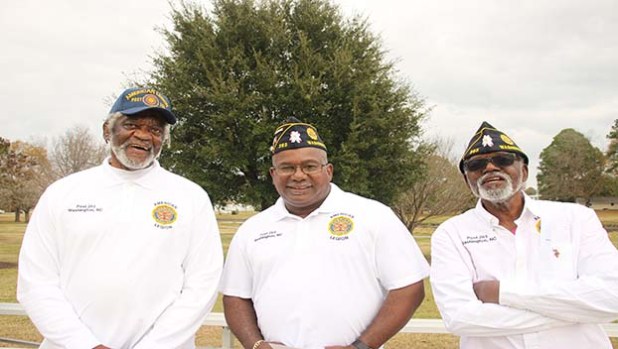 From left to right: James Smallwood, Jeffery Eggerton who is a Commander at Post 263 and James Thomas Tucker of American Legion Post 111338. (Holly Morgan/WDN). 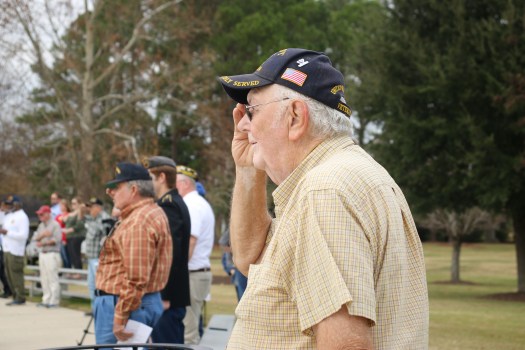 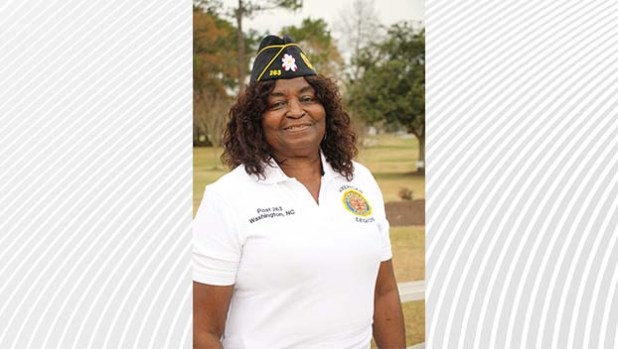 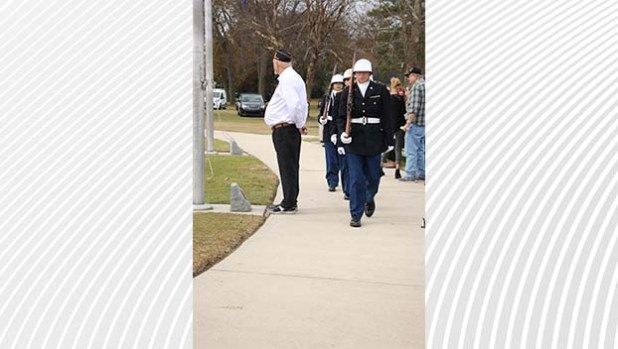 Veterans Day and Pearl Harbor Day were remembered with a combined ceremony on Wednesday, Dec.7 at Veterans Park in Washington. (Holly Morgan/WDN).

On the eighty-first anniversary of the attack on Pearl Harbor, Beaufort County residents gathered at Veterans Park in Washington to hold a remembrance ceremony honoring the day’s historical significance. At the ceremony, they dedicated time to honor Veterans Day as well. The Veterans Day ceremony was rescheduled due to poor weather.

The hour-long event included singing of the National Anthem, patriotic songs, a presentation of the colors from Washington High School’s JROTC and a speech from Connell Purvis, a Vietnam veteran from Washington.

When Purvis served in the United States Army for two years during the Vietnam War, he provided security to the United States Embassy and War Room.  He shared how difficult the war was for him as a young man who was 23 years of age with a wife and new baby. In Vietnam, he kept pleading with God to “not let him die in this mud.” For many years after he returned from war, Purvis struggled with the concept of why such atrocities exist. His faith in God helped him heal from the mental and emotional wounds the Vietnam War inflicted on him.

As a veteran, it’s obvious to him why military service should be remembered. It’s a bond a person has to the event that is shared with fellow servicemen and servicewomen. When asked why civilians should continue to remember Veterans Day, Pearl Harbor Day and similar events, Purvis said, “To me, it’s so obvious because when you’ve lived it and you’ve experienced it, it becomes so obvious – the bonding with all those that have paid that ultimate sacrifice.”

For him, “[Veterans Day] the most, single best event” in his life, because military service showed him how much he needs to depend on God.

In Beaufort County, residents can remember then 20-year-old Howard David Hodges, of Beaufort County, who was stationed on the USS. West Virginia. when Pearl Harbor was attacked on Dec. 7,1941. In October of 2020, DNA confirmation led to the discovery that Hodges served at Pearl Harbor. Later, a memorial service was held for him at Joseph Paul Funeral Home where many high-ranking military officials were in attendance. Stanley Edwards, a friend of Hodge’s family, said attending the memorial was “an awesome experience having known the family.”